THE head of the joint venture company behind the purchase of the Elders’ feedlot and abattoir in Indonesia says the company sees a strong future for the Australia to Indonesia cattle trade, despite the current challenges confronting the sector. 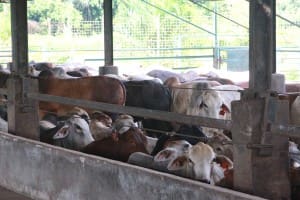 Australian cattle on feed in the former Elders’  feedlot near Bandar Lampung in Sumatra.

For more than two years Indonesian cattle importers and feedlots have struggled to maintain profitability in the face of high Australian cattle prices and, since July 2016, competition from cheaper imported frozen Indian buffalo meat.

However, with the price of Australian cattle easing below 300c for the first time in more than two years, the purchase by the PT Pramana Austindo Mahardik joint-venture is looking like a well-timed move by the stakeholders involved.

“The combined talents cover the full spectrum of the beef and cattle value chain,” he said.

“Our combined network will cover all the major islands. Indonesia is an archipelago and therefore, coverage plays a big role.”

He said the JV initiated a greenfield project in the last quarter of 2016 and is still exploring the industry for acquisition possibilities.

‘We have always believed in the Indonesian market storyline’

“We have always believed in the Indonesian market storyline,” he said.

“Indonesia, with her bonus population projection, is going to be one of the top 10 economies of the world in the ‘not so distant’ future.

“We are situated in a 250 million people market, who are projected to consume more beef as the economy improves and to fulfill the protein requirements.

“There is a cycle in every industry, we are confident that by leveraging on the partnership experience, we will be able to work thru the cycle and operate profitably.

“In fact, we are open to explore further opportunities within the vertical stream of value chain within the sector.”

Robert said that Indonesia and Australia made “great partners” in the sector.

“Plentiful source of quality cattle in combination with the largest market in South East Asia, you really cannot ask for much more than that.”