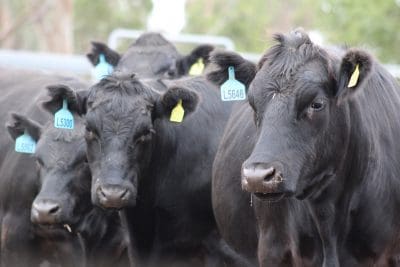 A sample of Black Angus cattle from Victoria, aged between 18 and 24 months and weighing an average of 500kg, exported by Elders via a sea-shipment to China in February.

Exporters and importers have been watching and waiting for months for the economics of the Australia to China cattle export trade to align, and it seems the recent downturn in Australian cattle prices is bringing that point closer.

Feedback from exporters this week suggests that lower Australian cattle prices have indeed sparked increased inquiry from Chinese buyers in recent weeks, but that interest is yet to translate into a confirmed second sea shipment from Australia.

Australia is the only country in the world with a protocol approved for the importation of live feeder and slaughter cattle to China.

Despite lots of hype about the market’s potential, only three small air shipments and one sea shipment of beef cattle have been exported from Australia to China since both countries signed a new protocol to open the trade in mid-2015.

However there has been significant interest and financial investment in the trade from commercial parties in both countries.

The main obstacles inhibiting growth so far have been the high and rising cost of Australian cattle, and strict conditions in the protocol that have curtailed the commercial viability of the trade to date.

However it now seems that several of these supply chains are now completed and ready to start importing. The Department of Agriculture confirmed to Beef Central this week that five individual supply chains in China are now officially ESCAS accredited and approved to receive Australian cattle.

Another potentially significant factor delaying the trade’s progress so far, as reported in recent months by regular Beef Central columnist Dr Ross Ainsworth, has the ongoing drought in Mongolia, which has been forcing large numbers of cattle onto the Chinese domestic market, and depressing local slaughter cattle prices. Dr Ainsworth’s view is that when the drought in Mongolia breaks and local supply tightens and domestic cattle prices in China increase, Australian live cattle imports will become a more commercially viable proposition.

Earlier this month Dr Ainsworth reported that some limited areas of Mongolia have now experienced useful rains, with reports suggesting about 35pc of the region’s pastures remain affected by drought conditions.

Last month a number of exporters suggested to Beef Central that a fall of 30c/kg liveweight in Australian cattle prices may be the level to trigger new orders from Chinese importers, who are understandably eager to get their newly constructed supply chains stocked with Australian cattle and trading commercially as soon as possible.

Working on current pricing for 500kg steers in Victoria (which comprised the bulk of cattle exported in Australia’s first sea-shipment to China in February), and taking pricing from MLA’s market info tool, it appears that prices have now fallen by around that level.

But while Australian cattle prices have been falling, the Australian dollar has been rising, which has at least partially negated the extent of the price reduction in the eyes of Chinese buyers.

However, if the downward trend in Australian cattle prices continues, it seems likely a trigger point for new Chinese import orders may not be far away.

“it is definitely livening up in China’

“It is definitely livening up in China,” was one exporter’s comment in a conversation with Beef Central this week.

Another commented that new orders seemed likely within coming months.

“Everyone’s making every effort to make it work, because there is strong beef demand there and people can see the value for both Australia and China in what could eventuate.”

But nor are there expectations that the trade will suddenly start taking massive individual shipments straight away, at least while an existing protocol condition that requires imported cattle to be slaughtered within 14 days of arrival remains in place.

“The market is going to be very measured and controlled,” one exporter said.