Slaughter cattle prices remain the same this month at about Rp 40,000 per kg live weight with the change in the AUD price above due entirely to the steep rise in the AUD exchange rate.

With steady prices for feeder cattle in Australia during July this has meant additional pain for importers who need to exchange a lot more Rupiah to get their foreign currency to purchase more cattle.

Feedlot inventories are generally running at below 50% after a reasonable number of sales over the Ramadan/Lebaran period cleared their backlog of fat cattle. Weak, post Lebaran demand has meant that only one new shipment of feeder cattle arrived in Indonesia during July while about 5 shipments are booked for August with all of these being purchased at the new expensive exchange rates.

For the first time in my memory of this trade (and I have been involved since the beginning) the Australian producer is the only part of the supply chain enjoying a profit margin.

The Indonesian importers, shipping companies and Australian exporters are all experiencing trading conditions which essentially mean that if they continue with their business, they must make a loss.

This is the reverse of the situation for the last 27 years where in almost every case, when trading margins were squeezed, producers were the ones who were forced to cut their sale prices in order to allow the trade to continue.

Logic would suggest that a trade cannot be sustained if the majority of the stakeholders along the supply chain are making losses.

The two key areas for price movements are the sale price of live feeder cattle in Australia and slaughter cattle in Indonesia. The price of feeders in Australia is being held firm by the very low numbers of stock following the drought. The price of slaughter cattle in Indonesia is being held down by the presence of Indian beef and the government ban on price rises.  I expect that Indian beef is here to stay and that the government will have no reason to relax the ban on price rises so that only leaves an Australian cattle price reduction to save the day for importers, exporters and shipping companies. Or the trade slowly comes to a grinding halt. Something has to change, as the current situation is not sustainable. 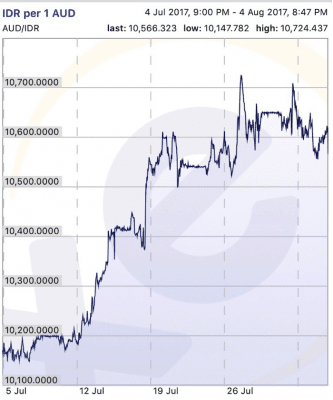 This steep rise in the strength of the AUD makes buying imported cattle much more expensive. Click on chart to enlarge.

The disruption in Indian buffalo exports has not impacted supplies in Indonesia as official figures state that there were 27,000 tons remaining in cold stores on the 5th of July with a further 1,148 tons imported later in July.

During July, Indian courts announced that the government’s ban on buffalo sales was illegal so selling of buffalo through traditional markets has recommenced allowing export abattoirs to get back to normal slaughter rates.

My agents in Jakarta continue to report that many small wet market traders are unable to obtain supplies of buffalo from wholesalers.

Further inquiry suggests that the reason for this is that wholesalers need to move large volumes of product because the margins per kg of buffalo beef are very small which makes it unattractive to supply very small-scale retail customers.

Slaughter numbers of live cattle remain at about 50% of their pre-Indian buffalo rates which suggests that the demand for Indian product has reached a steady state with each product sharing about 50% of the original fresh meat market.

Another winner from the Indian beef importations is the Cold Chain industry.

The industry association reports that installed capacity is 245,000 tons which is usually replaced 5 times per year allowing the total volume of product handled to be around 1.2 million tons annually. If the Indian beef imports continue, this capacity will need to expand.

The DGLS announced that the Special Acceleration Program on Mandatory Cattle Pregnancy (SIWAB) had not been successfully implemented for a number of reasons. I suspect that one of those reasons is that small farmers are more likely to be considering selling their cattle rather than breeding more as demand for slaughter animals has halved and the government has fixed slaughter cattle prices at unattractively low levels.

In another interesting news article this month the dramatic reduction in the number of dairy cattle was announced with the national herd shrinking from 576,000 cows in 2011 to an estimated 300,000 in 2017. And this reduction in numbers has taken place while the per capita consumption of milk products has been steadily rising. Slaughter cattle markets across Vietnam remain weak with demand in the south softer than the north. Butchers in the south are only interested in bidding on steers and bulls under 500kg with rates equivalent to last month’s Dong 68,000  per kg offered only for the very best yielding cattle.

The market in the north is much stronger with heavy bulls selling for as high as Dong 75,000 per kg live weight. Medium slaughter cows are attracting bids of around Dong 64 – 66,000.

The general theme of the market remains the same however with high import prices being strongly resisted by retail customers.

This is causing importers to reduce numbers purchased and do everything they can to cut the cost of their product. The main strategy to date has been to import low priced slaughter cows and buffalo from Australia. Buffalo have done well in Vietnamese feedlots so we may well see an increase in demand for this class of stock if the prices of Aussie live export cattle remain high. Buffalo are very comfortable in a feedlot environment and perform quite well.

Despite these problems, Vietnamese supply chains continue to innovate their down stream distribution networks. Dong Ha Trading Co is a good example, developing their new fresh beef distribution systems at Can Tho in the Mekong Delta province.  See their upgraded meat shop in the photo below designed to sell hygienic beef product from Australian imported cattle. Hygienic western style meat shop at Can Tho in the Mekong Delta.

No significant changes in the Thai market as the main export markets to China and Vietnam remain effectively closed leaving only the steady domestic trade to keep the wheels turning.

Nothing to report in Malaysia either with even the frozen buffalo prices remaining steady for a change at 22 Ringgit per kg.

My agent reports the continuation of good business conditions across the Philippines despite the extension of Martial Law until the end of December 2017. Good seasons and solid markets keep the products flowing and the prices of most agricultural commodities strong and stable. The Philippines has rarely had such an extended period of favourable seasons and economic prosperity. Meat and livestock prices remained stable during July.

This month has seen a small but significant increase in the price of live cattle in the Beijing region from Y21.5 per kg live weight in June to Y23.2 per kg in July.

The Inner Mongolian drought continues although some limited areas have experienced useful rains. The figures provided to me suggest that about 35% of pastures remain affected by drought conditions. Photo from George Black: Beef abattoir in Zhengzhou, about 1500 km north west of Shanghai. This modern facility is killing about 300 local cattle daily.

I spent a week in Brunei in July. Imported food is very expensive. A broad selection of locally slaughtered beef (from Australian cattle imported live) in a high-end Brunei supermarket. The exchange rate is about 1.08 Brunei dollars to one AUD$. Imported milk in Brunei – This price converts to AUD$4.71 per litre! My friend George Black, feedlot and abattoir consultant to the world, at a Boran (African Zebu) cattle feedlot project in Ethiopia. The feedlot is integrated with a sugar plantation. The cattle fattened in this feedlot near Modjo, about 120 km from the capital, Addis Ababa, will be either slaughtered locally or shipped live export to Israel or Saudi Arabia. George practicing his ploughing skills in Ethiopia. Look at the magnificent soil!