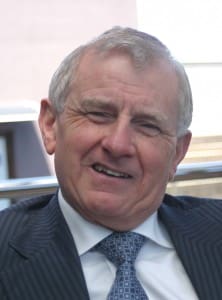 The former Labor minister said the industry’s commitment to dealing with this issue was important to his preparedness to take on the job.

“I said to them I need to be convinced that you are committed to dealing with this problem genuinely in the industry and that you are prepared to commit resources to it.

“I am confident that they are,” he said.

Mr Crean said there might be reluctance in the industry to impose standards rather than “let everyone run their own race”, particularly in a free enterprise model.

“But once they realised that the actions of some are really impacting on everyone, then the collective responsibility takes on a different dimension.

“I think that’s the point where this industry is seriously at,” he said.

“One thing is unshakeable – we as an industry are resolved to root out those elements that undermine our efforts and cause unnecessary pain and suffering of export livestock.

“The onus is on the industry – regulation can only go so far.”

Mr Crean said he took on the job because of his understanding of the industry, its potential and out of a sense of obligation to help it move forward, after being part of the Labor Government that closed the Indonesian live cattle trade in 2011.

“It was decision that I thought shouldn’t have been taken in that way, but nevertheless it was.”

He said significant strides had been made in improving the treatment Australian livestock exported overseas since the closure of the Indonesian live cattle trade in 2011, through the ESCAS system.

There was also a stronger understanding among exporters that responsibility was fundamental to the sustainability of the trade.

“Not to just the continuation of the industry, but if it is not got right, they won’t be able to grow.”

Mr Crean said there was bi-partisan support for the industry, but it did have to get the supply chain regulatory system right. He said abhorrent cruelty, poor treatment and slaughter of exported Australian livestock in overseas facilities had no place anywhere “least of all in the export trade.”

The ALEC chairman said Australia’s efforts in meeting worldwide demand for live export animals was lifting the standard of animal welfare globally and it was regarded as a leader in the area by the OIE.

“For anyone concerned about animal welfare – it should be obvious that if Australia withdrew from this trade, the impact on animal welfare in the global live export trade would be detrimental, to say the least, becasue others would simply step in,” he said.