AS much as the focus of breeders is placed on selection and management of joining cattle, calving is equally demanding of attention. Selection for genetic traits to improve calving will contribute to overall herd improvement, and calf survival is greatly determined by the management strategies producers employ in the breeding herd.

According to numbers presented at the Grazing Futures roadshow held in a number of centres in northwest Queensland earlier this year, there is on average some 35 million* cattle in Australia producing around ten 10 million calves. * Those apparently high figures were based on herd estimates compiled QDPI’s Dr Geoff Fordyce and others, discussed in this earlier Beef Central report.

The roadshow participants were told that of these ten million calves, around one million are lost between confirmed pregnancy and weaning. The largest proportion of these losses actually occur within the first week of birth.

These are significant losses, in anybody’s language. The estimates presented to the roadshow for Northern Australia suggested that one in four northern properties loses 15pc or more of calves annually. This represents a liveweight loss of 100-140kg/cow for the year.

While losses in southern Australia are lower than those recorded further north, the impact on production and income through calf loss is still significant.

Understanding the cause of calf loss remains an ongoing focus for much research in Northern Australia, but many of the results have application for any production system.

The dominant contributors to calf loss sit squarely on poor nutrition along with environmental loss.

The ability of cows to support newly born calves through adequate milk production is essential to increase the chances of calves surviving their first week of life. Newly born calves require a minimum of 2.5 litres of milk per day, increasing to six litres under hot conditions.

Research undertaken by Geoff Fordyce with Brahman cross calves identified the rapid impact that lack of milk intake will have on calf survival. 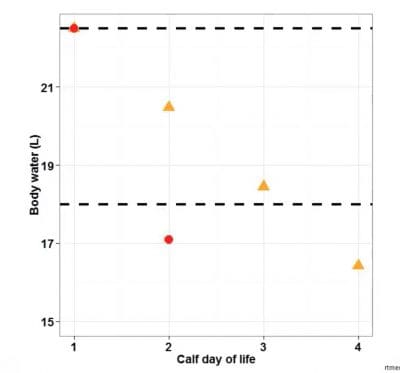 In practice the research undertaken by Geoff Fordyce highlights that if northern calves do not drink, they will lose 0.3pc of bodyweight per hour. Over a day this loss equates to 7.5pc of body weight.  If this extends to a two-day period, the weight loss reaches 15pc – the equivalent of 20pc water loss from the body.

At this stage it is unlikely for the calf to recover and mortality soon occurs.

Critical window for lactation to commence

This research suggests there is a critical window for lactation to commence in order to maximise the chances of calf achieving its daily milk intake.

The first 24 hours of life are the most critical with the subsequent 24 hours required to maintain body hydration. However, it has been demonstrated that around 30pc of tropical cows do not come into full lactation until around three days after calving.

Producers often over-estimate the value of selection for milk as a trait. In the context of calf survival, the EBV for milk does not provide any indication of how quickly a cow will commence full lactation. In a practical sense, selection for milk does not produce milk any quicker, and the chances of calves dying through dehydration in the critical first few days remains unaltered.

Where northern producers can make an impact on milk production, as well as using the opportunity to allow their genetic section decisions to be rewarded, is in the area of pre-calving nutrition.

The two weeks leading to the commencement of calving is a critical point for producers to address nutrition and where necessary look to increase the energy of offer to cows in order to maximise the chance to commence full lactation on the day of calving.

This advice is often a challenge for producers to accept.  Many are concerned that increasing energy intake in the last period of pregnancy will result in increased levels of dystocia. In fact, research has clearly shown that poor nutrition in the early stages of pregnancy is a greater contributor to dystocia than is commonly recognised.

Evidence presented at FutureBeef’s Calf Alive Symposium held back in 2018 highlighted that there is no correlation between udder size and the amount of milk a cow can produce.

As a basis of selection, culling cows for bottle shaped teats, or those with large pendulous udders can help reduce the number of females likely to cause issues for calves’ early life milk consumption and ongoing survival. While it is unknown if the delay in starting full lactation is a repeatable trait, it will be difficult to actively select and cull cows that are slower to start lactation.

Combining increased energy to promote early lactation, along with selection for fertility traits such as higher calving ease and shorter gestation length could offer a solid strategy to reduce early calving losses.