Weekly genetics review: Is it worth applying selection pressure for net feed intake?

This week’s genetics review concludes our two-part series exploring net feed intake. Which breeds are measuring NFI and how are seedstock breeders using NFI in their selection decisions?

IS IT in the broader beef industry’s interest to produce more feed-efficient cattle?

A large Queensland commercial feedyard running around 30,000 head in a broad spectrum of feeder types generated a few figures from its own operations for Genetics Central to illustrate the point.

Using 100-day cattle as a starting point, and a ration price as it is today worth around $350 a tonne, a typical feeder in the yard currently consumes around 15kg/day. Given a typical NFI figure in the yard of 7.2:1 as fed, even a ten percent improvement in feed efficiency would be worth $52.50 per steer to the business.

Apply the same 10pc NFI improvement formula on a Wagyu feeder, 350 days on feed and consuming 12kg/day, and the efficiency advantage blows out to a massive $147 per head. As we explained in last week’s report (click here to view), Net Feed Intake is a measure of residual feed intake after adjustment for differences in average body weight maintained and growth rate through the test period.

The recent analysis of Net Feed Intake measurements for the first five cohorts of the Angus Sire Benchmarking Project (Angus Beef Information Nucleus) puts the Angus breed at the forefront of testing for this trait.

The feed intake data was collected at University of New England’s Tullimba research feedlot near Armidale, NSW utilising GrowSafe equipment (picture above). A further 1500 Angus steers will be tested over the next three years covering Cohort 6, 7 and 8 of the project.

All measurements are analysed in the Angus BreedPlan analysis to calculate Estimated Breeding Values (EBVs) for the sires of these steers. Feed intake and serial weight data are used to calculate NFI values for each steer measured. 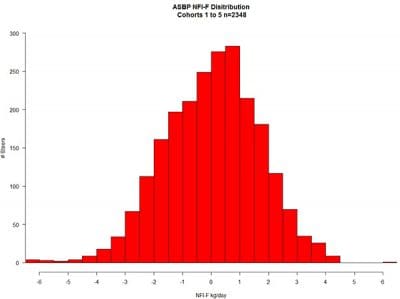 Importantly, the NFI data collected through the ASBP is analysed in Angus BreedPlan to produce the Net Feed Intake – Feedlot Finishing EBV (NFI-F EBV). This EBV is an estimate of genetic differences between animals in feed intake at a standard weight and rate of weightgain when animals are in a feedlot finishing phase.

NFI-F EBVs are expressed as kilograms of feed intake per day. Lower, or more negative, NFI-F EBVs are more favourable. For example, a bull with a NFI-F EBV of –0.6 kg/day would be expected to produce progeny that consume less feed per day than the progeny from a bull that has a NFI-F EBV of +0.8 kg/day (when the progeny are of similar weight, are growing at a similar rate, and are in a feedlot finishing phase).

Listed below are ASBP sires that have progeny recorded for feed intake, that are in the top 10pc of the Angus breed for the Angus Breeding Index (ABI) and a below average (i.e. eat less than expected) for NFI-F EBV. 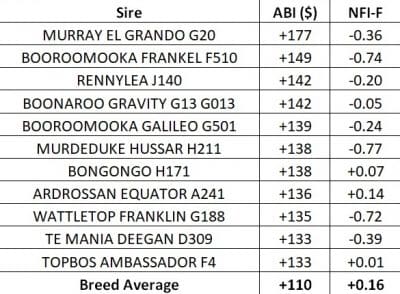 The latest NFI EBVs for all sires in the ASBP are available from the Angus Australia website through the ASBPSELECT tool. Progeny average values and rankings for NFI are also listed in updated ASBP Progeny Performance Reports.

Mr Duff said Angus breeders who considered NFI EBVs used them in association with the appropriate selection index for their breeding program, with the aim of selecting high index sires with desirable NFI genetics.

“Incorporating NFI-F EBVs into bull selection decisions should be considered the same way as other specific EBV traits. First, choose the selection index appropriate to the herd, rank bulls on that index, then consider individual trait EBV thresholds suitable for the particular breeding program,” he suggested.

“If using the NFI-F EBV in selection breeders should pay particular attention to the growth and fat, including IMF, EBVs as well.”

“Like any trait, single trait selection is not advised,” he said.

Herefords Australia has tested almost 1000 steers for NFI-F in the Tullimba feedlot from five cohorts of their Beef Information Nucleus progeny test program.

All performance data that is collected within the progeny test project is stored on the Herefords Australia database and analysed within the TransTasman Hereford BreedPlan evaluation.

All 180 sires listed as “Published Sires” on the Herefords Australia website have available NFI-F EBVs ranging from -0.75kg to +0.52kg showing the genetic variation which exists for this trait in the Hereford breed in Australia.

The top ranking sire for NFI-F, Yarram Unique F181 also has very high indexes including +$169 for the Grain Fed Steer Index which is in the top one percent for the breed for that index. The next ranked sire for NFI-F, Yarram Legion C091 has a Grain Fed Steer Index of only +$75, which is below breed average, which demonstrates the ability for Hereford breeders to select high indexing sires with favourable NFI EBVs. 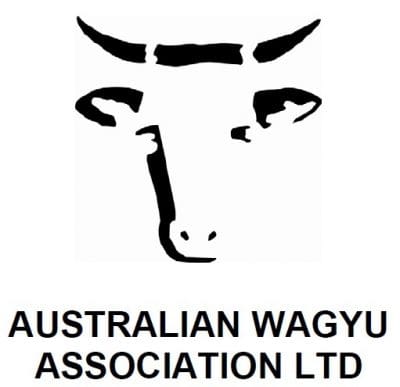 The Wagyu breed has also been active in measuring 900 animals for NFI-F utilising ‘Grow Safe’ equipment installed at the Kerwee Feedlot near Toowoomba, Qld.

The progeny of both Fullblood Wagyu sires and crossbred Wagyu sires have been tested on the same testing protocols as are used for Angus and Hereford steers of a 28 day introductory period and 70 days of measurement of feed intake and weightgain. All animals in the first three cohorts were from the Darren Hamblin’s extensive Strathdale stud and commercial Wagyu herd at Sarina, Qld but animals from several other studs have been included in the cohort currently being tested at Kerwee.

NFI measurements are not currently being analysed in the Wagyu Breedplan analysis. Technical services manager with the Australian Wagyu Association, Carel Teseling said the AWA was taking a cautious approach to how it utilised the NFI data currently being collected, as they were keen to see what the correlation was between NFI and other traits such as growth rate and the all-important marbling trait in the Wagyu breed.

“We want to be sure that we do not head off in one direction and then find we should change direction. It is early days for how we utilise the NFI trait in the Wagyu breed,” Mr Teseling said.

A few individual seedstock breeders in Australia have been actively pursuing feed conversion efficiency for a long time. Jon Wright who breeds “Blue E” (Shorthorn/Angus composites) at Cowra has been measuring around 100 young bulls per year for NFI-P for the last 20 years.

He has recently installed “Grow Safe” equipment to replace the manual individual feed intake measurement equipment he formerly used. All data is submitted to the Angus Australia crossbreed register and analysed as part of Angus Breedplan. Mr Wright publishes NFI-P EBVs for all sale bulls and said many of his clients take an interest in the NFI-P EBVs with some buying bulls from him because he has measured feed intake and publishes NFI-P EBVs for his bulls.

He believes that the reduction in methane production from NFI-efficient animals is another major plus.

“We know that methane production by cattle is directly related to feed intake. If cattle eat less and gain the same amount of weight and eat less to maintain themselves as mature animals and rear their calves, they will produce less methane,” he said.

“While there are currently no rewards such as carbon credits for cattle which eat less, there may be in the future. Cattle are major producers of methane on a world wide scale, and there is increasing concern about their effect on global warming and its impact on climate change,” Mr Wright said.

“NFI efficient cattle are a ‘win-win’ because they require less feed to grow and maintain themselves and they produce less methane,” he said.