The average herd bull travels and additional 11km a day in the first 21 days of joining – on top of normal walking for feed and water. This is directly correlated with calving numbers, and so the ability to walk and make this happen is crucial to joining success. Paying close attention to feet and leg structure when buying replacement bulls this season is a great place to start, says genetics editor Al Rayner in this week’s column…. Much of the focus is given to bull management and female condition. These are significant areas, and they require close attention in order to ensure the opportunities to achieve high conception rates are realised.

Preparation for joining in many ways should start at the point of sire selection. It’s important to note that a bull’s physical ability to walk, as well as to serve, directly impacts on the conception rates recorded in the herd he is working in.

Appreciating the additional workload experienced by bulls during joining has been researched on a number of occasions. Some of the notable results from this work have established that bulls have significant activity levels in the first 21 days (the first cycle) of joining.

It was found that bulls would travel on average an additional 11.3km/day during this period.

However, when compared to the second period, those bulls dropped back to travelling around 2.45km/day. It was also noted that activity rate was highly correlated to the number of cows mated per bull per day.

While most producers would intuitively recognise that joining increases the physical demands on bulls, having an appreciation of the additional activity associated with walking during joining can help focus attention on key traits such as feet and legs.

It’s important to note that the distances recorded were in addition to normal grazing and maintenance.

It is worth noting the work conducted by Dr Mike Blockey from the Victorian Department of Agriculture during the 1980s. His work focused on soundness and has been a benchmark for many producers and researchers. Dr Blockey’s work suggested that in southern bulls more than three years of age, more than 25pc were unsound. 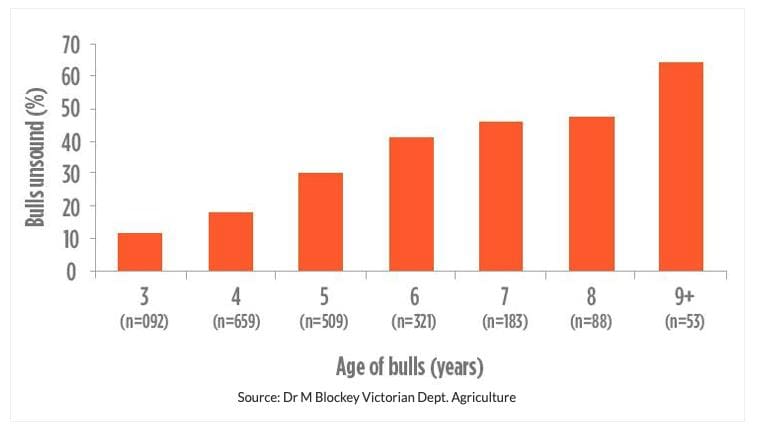 The leading cause of unsoundness were issues associated with feet or legs (13.8pc). In the context of fitness to joining, and to cope with the demands of increased walking, this data should re-enforce the need to focus on correct angles for feet and legs in bulls being assessed pre-sale.

Bulls that display less than ideal structure may well struggle to meet the demands of a tight joining period. This can lead to issues associated with more drawn-out calving, later and lighter calves as well as preventing some cows from being mated in the given time frame.

While these obvious issues can be identified reasonably easily, producers should also consider the impact more slight issues may have as bulls age. 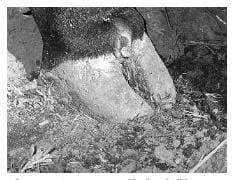 Some issues such as interdigital fibroma (a growth between the toes on feet) can become a significant issue for an animal over time. These growths often start as small issues, however over a period their growth spreads the claws and allows the softer tissue of the foot to be exposed to damage. The direct result is a restriction on ability or willingness to walk distances, and a reduction in joining rate as a result.

The impact of feet on joining success shouldn’t be underestimated. While young sires are often very athletic and move well at sale time, it’s important to consider how well they may adjust to a new environment as well as working to full capacity.

As producers look at sale bulls in coming weeks, closer examination of feet (not just angles of pasterns and legs) can be beneficial.

Issues to avoid include overgrown scissor claws or very curved claws. While curved claws can be associated with property of origin, particularly those on blacksoil country, they can also occur as a result of overfeeding.

Generally, poor claw shape is a result of issues with limb structure and can signal an issue that may not have been noticed in the first inspection.  Either way these issues have the capacity to undermine your joining program and can result in less calves on the ground.