MID-WAY through the 2021 spring bull sale season and the predictions of a record year have not only been met, but in many cases exceeded. Across northern NSW and southern Queensland, individual sale records have been reset for almost every seedstock breeder involved.

Texas Angus has earned national recognition, setting a new Australian sale record for the Angus breed with the sale of Texas Iceman R725 for $225,000. While much focus was placed on this individual’s sale price, the overall average for Texas was $20,967 for a total clearance of 181 bulls.  As reported previously in Beef Central, this extraordinary result represents a 49pc increase on averages since the 2020 sale.

Overall, the positive trend for bulls has seen a remarkable increase in sale averages this year. A quick snapshot over 11 randomly selected sales from a variety of popular breeds held in the past six weeks (2021 result marked in green) shows an average sale price of $15,377. Compare that against the 2020 sale average for the same 11 studs (blue line) of $9631, and it represents a 60 percent increase over the past 12 months.

Looking back over the past few years, the impact of drought conditions across eastern Australia is evident in the sale average trends. The demand for bulls in the face of high feed costs and herd reductions saw averages in the 2018 (yellow, in the bar chart above) and 2019 years (grey) falling well below the general five-year average (white plot line).

The change in season and the commencement of buoyant beef prices in 2020 saw a solid turnaround, and this trend has clearly strengthened this year (see average price paid for combined 11 studs per year, plotted below). 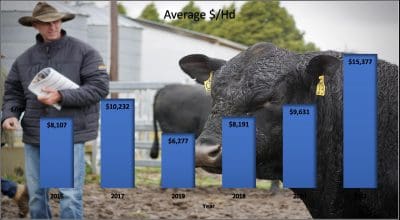 While the average value of bulls has increased in the past 12 months, it’s important to recognise these increases have not occurred in isolation. Across the country, prices on offer for commercial cattle of all descriptions have also increased dramatically. More significantly, these increases have been consistent, offering producers greater confidence to invest in new genetics.

Placing a price on bulls occasionally sees producers using a rule of thumb, often based on the value of seven to eight steers. In an earlier Beef Central article, respected stud stock agent Harvey Weyman Jones from GDL provided a record of bull sales prices and a ratio of bulls to steers.

This week Mr Weyman Jones updated his estimations, based on forward contract prices for September slaughter cattle increasing by 100c/kg from the June forecast to 830c/kg. 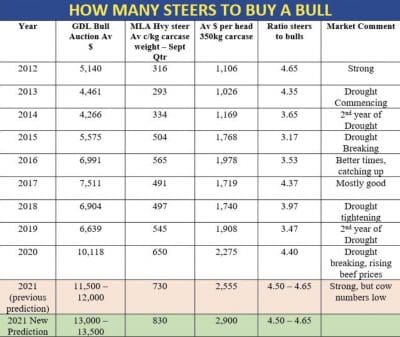 Mr Weyman Jones said the table highlighted the relativity bull prices have to the broader industry’s’ position in both season, feed and market prices.

“In the drought years of 2014 through to 2017, it was a very difficult time and bull prices reflected that,” he said.

“In relative terms, bulls aren’t that much more expensive today. Yes, we expect that the average will be up $3000 on last year. However, it’s important to remember that value is underpinned by the market price for commercial cattle, and this year its exceptionally strong.”

Mr Weyman Jones also commented on earlier observations of numbers and the overall quality of bulls offered across the sales.

“The impact of the drought can be seen in this year’s numbers. There aren’t additional bulls to sell in the paddock after the sales. This year’s bulls were born in 2019 and anything not up to standard hasn’t been carried through to now.”

“This means that those spare paddock bulls that people often wait for, won’t be available.  Those producers who often buy these cattle have been doing so for months and not waiting.  If you have been waiting for them, you will probably miss out this year.”

Based on the context of current cattle prices, the rise in averages for bulls shouldn’t be seen as a barrier for producers seeking to replace sires.

As the 2021 spring selling season extends into Queensland, it’s more than likely the strong averages will continue, but it’s unlikely that these prices will lose their relativity to commercial cattle values.

The general advice for the season to come is to be well planned ahead of the sale and consider the sires best suited to individual breeding objectives. While there will be competition and higher averages, the relativity shouldn’t place good bulls beyond most people’s budgets.