VICTORIAN Wagyu pioneer David Blackmore has added a new breed of cattle to Australia, processing his first carcase of beef from the enormous Spanish Rubia Gallega breed earlier this year.

Mr Blackmore was one of the first in the country to import Wagyu genetics and is widely regarded as a leading producer of Fullblood Wagyu beef, selling to some of Australia and the world’s best restaurants.

But he discovered the Rubia Gallega breed about a decade ago, when he was visiting one his family Wagyu business’s European meat distributors with his son Ben – who now owns and runs the Wagyu company.

“We saw this beef sitting there dry-ageing – it was marbled as heavily as an F1 Wagyu, or even more so, but it was huge,” he said.

“We knew it was grassfed, you could tell by the colour of the meat and fat, being yellow.

“When we asked them what it was, they wouldn’t tell us initially. But they said let’s go back to our house, have a barbeque lunch and you can have a taste of it.”

The discovery was the catalyst for Mr Blackmore’s ‘retirement project’ on his Northern Victorian property, East Mt Ada, which he purchased in 2017. 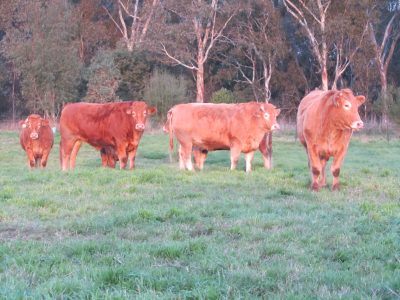 Mr Blackmore said a lot of the high-end restaurants who were buying his Wagyu beef, were starting to look at premium grassfed items to add to their menus.

“We don’t believe we’ll have to find new customers, our current customers who take our Black Wagyu will also take the grassfed Rubia Gallega beef,” he said.

Their business is the same as anyone else’s, they’re all looking for a point of difference

“Their business is the same as anyone else’s, they’re all looking for a point of difference in their marketing.”

Mr Blackmore said the Spanish Rubia Gallega breed had a similar history to Wagyu, which was one of the main attractions.

“We went to one farm where it was only 15-years-ago that they had stopped using them as a work animal,” he said.

“We’ve learnt with Wagyu that the marbling wasn’t created for taste, it was created because it was a source of energy.

“We were looking for cattle that had that old history of being draught animals, so we could have that marbling.”

With the breed and the market in mind, Mr Blackmore set about importing the Rubia Gallega genetics from Spain to Australia.

“We went to majority of the main breeders’ farms and we went to the bull stud – all the bulls for the breed are produced in one stud, run by the Spanish government.

“We then selected the genetics we thought would best suit Australian grazing conditions.” 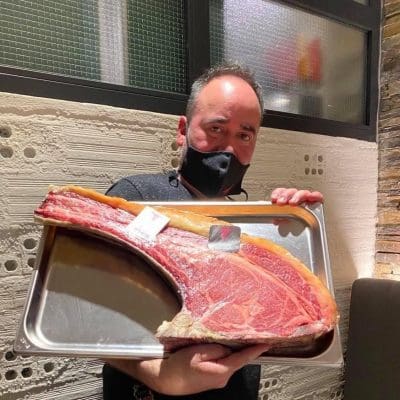 The Spanish Rubia Gallega is known for its size and marbling. Click on image for a larger view. Photo: David Blackmore

Mr Blackmore imported embryos and semen and started his Rubia Gallega herd about five years ago on East Mt Ada.

He said he was aiming to slaughter at 30 to 33 months of age, similar to his Wagyu program, but the giant Rubia Gallega carcases were a potential problem.

Rubia Gallega in Spain are traditionally grown out to extremely heavy weights.

The first Australian-bred steer was processed and sold to the prestigious Rockpool Bar and Grill in Sydney and Melbourne. It weighed 1098kg live and produced a massive 735kg carcase (reference photo at left).

“It produced an unbelievable 67pc yield, but with a 735kg carcase the abattoirs were running around getting hooks to suspend it off the ground,” he said.

“We might not be able to keep them for as long as we want, simply because the carcase weight will be too much for the abattoirs to handle.”

David Blackmore’s ‘retirement hobby’ Rubia Gallega program has been put on hold since the first kill, with COVID 19 closing premium restaurants in both Sydney and Melbourne.

But Mr Blackmore said early stages were a success, with Rockpool dry-ageing some of the meat and using the entire carcase.

“They’ve got a really good dry-ageing set up, they did dry-age this carcase much the same as they do in Europe,” he said.

“They couldn’t believe how good the butt cuts were, they were putting topsides and cuts like that on the menu as steaks.”

Mr Blackmore said the goal was to build his herd up to producing 20 Rubia Gallega carcases a month, which he said was about five years away.

“Our goal is not to feed the world, but to supply exclusive, high quality grassfed beef directly to fine dining restaurants in numerous countries,” he said.