THE rapid momentum being seen in the animal genetics field through the application of genomics has underpinned the launch of a gleaming new $11 million state-of-the-art DNA sampling and analysis facility near Brisbane on Friday.

Supported by the Queensland Government’s Advance Queensland Industry Attraction Fund, the new site developed by Neogen near Ipswich is Australia’s largest genomics facility, with capacity to test up to one million DNA samples each year with its high-end genomic analysis tools and robotic processing.

Global genomics company Neogen provides a range of diagnostic solutions and services for the food processing, animal protein and agriculture industries, covering animal genomics, food safety and animal safety. The company does business in 160 countries around the world, and has a market capitalisation of US$2 billion.

The new 3000sqm Ipswich laboratory, tech support, handling, warehousing and distribution complex was officially opened on Friday. The company has invested more than $100 million in Australia since arriving in 2017 – much of which was self-funded.

The new facility replaces a smaller centre at the University of Queensland’s Gatton campus, which outgrew its working capacity.

Neogen Australasia senior director Bobby Creasman said the new centre provided room to grow into the future and supported the company’s promise to positively impact the local and rural employment market and the agricultural industries.

“Neogen Australasia currently employs 68 staff and we expect to create at least another 25 new jobs in the next five years to ensure we can continue to meet the demands and expectations of Australia’s livestock producers and food processing companies,” Mr Creasman said. Neogen acquired the current genomics business from the University of Queensland in 2017, and more recently spent $500 million acquiring 3M’s global food safety division. Since 2017, through organic growth and acquisitions, the company has grown annual revenue in Australian from $3 million to $35 million a year.

“This site is a great genesis for the new company, and the timing for this new facility is wonderful,” Dr Lilly he said. “We are able to service customers better by operating in-country, and meeting their needs.”

Neogen will also be investing further in DNA sequencing machines, each worth around $1 million, with the potential to have a huge impact on future livestock production through sequencing thousands of animals quickly.

“We are just at the tip of the iceberg in where genomics is going to take livestock production – increasing what the industry is doing, making animal production more efficient and sustainable. That’s where this business is going.”

At this point, beef cattle represent 60pc of Neogen’s overall Australian genomics business, with Wagyu making up the largest portion of that (about 15,000 samples last month), followed by Angus. However a host of other beef breeds are also tapping into the service.

Future opportunities lie in the genomic testing of not only seedstock cattle, but feeder cattle destined for the feedlot. Animals with superior marbling and growth rate potential may be managed separately from cattle with lesser potential.

Neogen is already doing some business in the US for this purpose, and anticipates it will follow in Australia.

“We are already working closely with our industry partners like the Australian Wagyu Association in this,” Dr Lilly said.

“It’s important in Wagyu, because those animals are fed such a long time and non-perofrmance can be costly. We may not be able to predict the elite feedlot and chiller performers among Wagyu F1 crosses, but if we can at least eliminate the bottom ten percent, it would be commercially valuable. It’s a win-win.”

“We definitely see over the next five years, as this technology advances to fit the speed of commerce (ie feedlot operations), we think we can penetrate possible 20-30pc of that market. In the US, 30pc of all dairy heifer calves going into milk production are now being genetically tested. That’s currently about 3.5 million every year.” 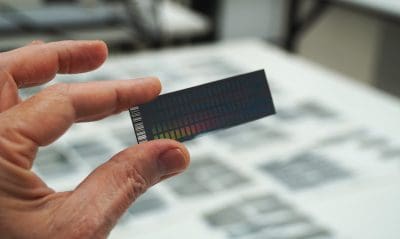 Some of the density DNA chips now in use (see image) cover 100,000 DNA markers, each with 500,000 points of data. It is not that long back when DNA tests used in Australia were analysing only 16,000 markers.

Current analysis looks at more than 60 individual traits in dairy, and up to 30-40 in beef, including recessives.

Once each chip is scanned, the presence of the marker is indicated in green, and its absence in red on a screen (see image below). Data is analysed and checked by a team of six data scientists, before delivery to customers. 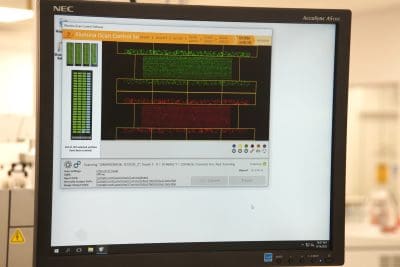 The investment in the new facility provides the Australian agribusiness sector with streamlined and enhanced solutions for every stage of the food supply chain, Friday’s audience was told.

“Our new Ipswich facility will be at the forefront of ensuring greater accessibility of genomic tools at improved value to producers, while providing more information across the livestock production value chain,” Dr Lilly said.