WHILE many of the factors that affect the eating quality of a carcase and its suitability for Meat Standards Australia programs are heavily influenced by animal handling and management, many factors are also influenced by the genetics of an animal.

The key factors impacting on eating quality that are influenced by the producer include: While animal management and handling play a big role in factors that affect the MSA Index, there is also an opportunity to increase MSA Index values through genetic selection.

Ossification is the process whereby the cartilage present around the bones changes into bone as the animal matures, and is a measure of the physiological maturity of the carcase. Although it can be roughly associated with the animal’s chronological age, ossification takes into account the entire developmental lifespan of the animal which may be affected by nutrition, sickness and/ or temperament. 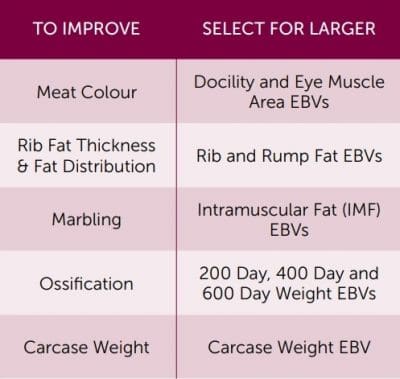 Selection for increased rib fat can be achieved by selection of animals with higher Rib Fat EBVs. Rib Fat EBVs are estimates of the genetic differences between animals in fat depth at the 12/13th rib site in a standard weight steer carcase, with higher EBVs associated with greater fat depth.

While a higher level of rib fat is favourable for superior eating quality and MSA index, this benefit needs to be balanced with the negative effect that higher levels of rib fat may have on carcase yield.

Whilst an important specification in most livestock grids, carcase weight only has a small impact on MSA Index, with MSA calculating that as HSCW increases by 1kg, the MSA Index will potentially increase by less than 0.01 Index units. In other words, an increase in HSCW of 100kg equates to an increase in MSA Index of 1 unit.