Breeding Black Baldies – Is there a price difference to consider?

THERE have been many national and international studies focused on evaluating the impacts crossbreeding can have on beef production.

As discussed in last week’s article, the advantage of hybrid vigour, particularly in increasing growth rates, weaning weights and on traits of lower heritability are extremely well demonstrated. 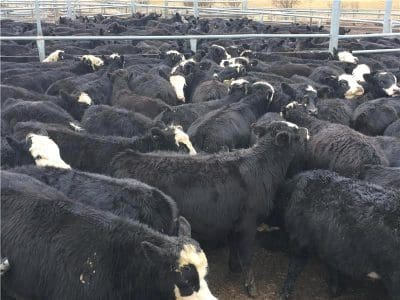 Across many southern Australian production systems, the opportunity to join Hereford sires over Angus cows has long been a ‘go-to’ option for some producers seeking to commence crossbreeding.

The value of the Black Baldy has been recognised for both its growth and additional weaning weight, as well as the demand by restockers seeking suitable F1 replacements for breeding other crossbred cattle.

However, while the additional weight or demand for F1 females have been key factors in many producers’ decisions, the impact on eating quality and Meat Standards Australia grading index has become an additional consideration.

Recent research conducted through the University of Adelaide with the support of MLA and Herefords Australia, explored a range of results from on farm production through to MSA Index.

The research, described here in an earlier Beef Central article , was a significant undertaking using 30 Hereford and 22 Angus sires, which were mated to 1100 Angus cows and heifers in a large commercial herd run on pasture at Musselroe Bay, Tasmania.

As a result of these matings, about 1650 calves were born. The steers were grown on pasture for an average of 23 months and then slaughtered.

The project resulted in several useful insights for commercial producers.

On a production basis, the crossbred calves sired by Hereford bulls were heavier at birth and weaning than straightbred Angus calves. As expected, these results were in keeping with many other research projects.

However, it is also worth noting that Hereford-sired calves from heifers (but not from mature cows) had more assisted births (+8.2pc) and more calf deaths (10pc vs 5.1pc).

Although the additional weight of the Hereford-sired calves resulted in higher Hot Standard Carcase Weights, carcase quality measurement including MSA Index were lower than straightbred Angus steers – a not unexpected result.

In practical terms, the 0.5 higher MSA index for pure Angus equated to a 1.56pc increase in value to a producer (at the time the research was done).

However, as Hereford-sired carcases had a 4.1pc advantage in HSCW, pure Angus steer carcases would need to attract a 4.1pc premium for that level of eating quality to compete in value.

As producers evaluate crossbreeding options, particularly using Hereford and Angus genetics, it is important to consider how easily a 4pc premium for straightbred steers can be achieved at sale.

More importantly, while this premium can be a significant lift in return, crossbreeding has an impact across a range of factors which may cumulatively exceed the value of a 4.1pc premium when analysed across a whole farm gross margin.

When considering a program, the research highlights the importance of using Hereford bulls over Angus cows rather than over Angus heifers.

At the same time, it is worth also considering selecting sires with EBVs for lower birth weight and higher calving ease.

Given that there is also a difference in marbling between crossbred steers and straightbred Angus steers, producers may also find value in selecting Hereford sires with above average EBVs for intramuscular fat, ore marbling.