A SEARCH for a sustainable and simple crossbreeding system has led a Tasmanian Angus enterprise into becoming the vehicle for a landmark research trial undertaken by Herefords Australia.

The quest by Musselroe Beef managing director Greg Bradfield to quantify the results led to a partnership with Herefords Australia to conduct a black baldy crossbreeding trial, designed to evaluate the traits valued in the whiteface animal by the commercial industry.

The project has received 50 percent co-operative funding over an initial three-year period through the Meat & Livestock Australia Donor Company.

The trial is being run on Cape Portland, a 4066ha property in north-east Tasmania owned by Tasmanian Hydro, fringed by a rugged coastline, pristine beaches and conservation areas. 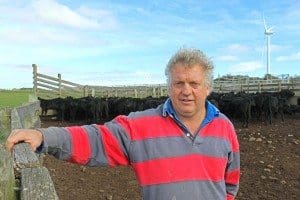 Cows and heifers were artificially joined to 11 industry-leading Hereford sires, and four Angus sires as a comparison, last spring.

“While most producers never dispute the qualities of the black baldy and its undeniable contribution to profitability, more definitive data analysis on the value of the hybrid vigour effect of this crossbred is considered critical,’’ Mr McKew said.

Musselroe Beef is a family agricultural business founded in 2009, and running 5000 cattle.

Calves are weaned in March-April and finished to 480-550kg liveweight.

“We wanted a sustainable crossbreeding system which was easy to manage and would give us a good outcome while retaining the F1 female,” Mr Bradfield said.

“It was timely when Herefords Australia contacted us to see if we would be interested in being involved. What we were seeing at weaning time was hybrid vigour coming into play with a more robust, thick-set animal with slightly higher weights.”

“The exciting part of this trial is joining the F1 females to see what benefits there are on the maternal side – typically if we just weigh the carcase, the trial would finish then.”

Rainfall and grazing budgets are assessed monthly, and pastures are not grazed below 1000 kilograms of dry matter per hectare.

“We use a grazing pressure index, which is the long-term stocking rate divided by long-term rainfall, to give our current position relative to a benchmark in terms of carrying capacity per 100mm of rainfall,’’ Mr Bradfield said. “We normally achieve 502 DSE days per hectare per 100mm of rain.’’

There are a number of strategies in place to manage periods of low rainfall.

The main strategy is to have a backgrounding mob on the farm comprising roughly 20pc of the stocking rate. If rainfall starts to drop, and stocking rate should be lowering, this mob is moved to a second property at Nebowla.

A total of 358 maiden heifers were artificially inseminated to Hereford and Angus sires over two cycles in September-October, followed by 305 first-calf heifers, and pregnancy-scanned in December by Handley AB Breeding Services, Wynyard.

The maidens began calving in June, while the older females are now calving.

At calving, the dam’s identification and the birthweight of the calf will be recorded. Calves will be weaned at seven to eight months, their 200-day weights collected and then finished on improved pastures at Nebowla, while the heifers will remain at Cape Portland.

The steers will be finished to 450-550kg liveweight and processed at Greenham’s Smithton plant in northwest Tasmania.

Professor Wayne Pitchford of University of Adelaide’s School of Animal and Veterinary Science, said black baldy cattle had proven to be highly productive in a range of studies over the past 50 years.

“Given the genetic changes in both breeds, it is worth evaluating them on an ongoing basis,’’ Prof Pitchford said.

“In addition, this trial has been designed to progeny test young bulls with links into other projects. This will help genetically benchmark the trial, and also provide valuable information for the development of genomic selection in both breeds.’’

Prof Pitchford said the trial aimed to measure traits not included on BreedPlan. These include full MSA grading of steers, age at puberty of heifers, and body condition of cows during winter.

“The project is well-designed and is a long-term partnership between a leading producer, breed society and the University,” he said.

“We will look for opportunities to add student projects to the trial and are delighted to be part of such a partnership.’’