AN AUSTRALIAN record price for Angus bulls, and a new all-breeds record average for a single-vendor bull sale has capped a strong start to Eastern Australia’s 2015 spring bull selling season

Ross and Dimity Thompson’s Millah Murrah bull sale held near Bathurst yesterday has set a series of new breed and industry benchmarks,  including a new Angus breed record price for bulls of $150,000.

The result captures some of the sheer strength of confidence evident across the Australian beef industry at present, with a big line of Angus backgrounder steers, 223kg, selling on AuctionsPlus this morning for a phenomenal 430c/kg liveweight. 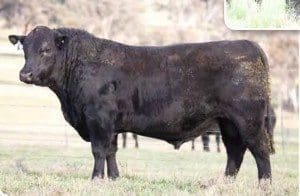 All three studs involved in the purchase have been strong supporters of Millah Murrah genetics for many years. The bull will go into a collection program for semen sales.

He was an ET-bred calf by New Zealand-bred Hingaia 469 and from Millah Murrah Flower G41.

His sire, Hingaia 469, is ancient genetics, by Angus breed standards, being a 1986 calf, but offering an important outcross to the breed. His key attraction is exceptional strong maternal traits, breeding exceptional constitution into his calves.

Beef Central was told he delivers a lot of the ‘old fashioned’ traits of bone, strong heads, deep fleshing and easy do-ability in his progeny. Hingaia 469 did not get a lot of use early within the Angus breed, but the industry started to wake up to him just as most of his semen reserves had gone. His semen now sells for $1500 a straw.

The 14 sons of 469 offered in yesterday’s Millah Murrah catalogue averaged close to $30,000, including three full ET brothers to the record-setter averaging $21,000.

Yesterday’s record-setter eclipsed the previous Angus breed record of $117,500 set two years ago by Irelands Angus. It did not come close to all breeds bull records, however, with two Lancefield Brahman bulls selling years ago for $300,000 and $200,000, and a Droughtmaster bull in 2009 making $180,000.

Millah Murrah yesterday also set a new all-breeds record average price for single-vendor bull sales, at $14,876, for a total clearance of 105 bulls. The top-priced bull obviously contributed to that, as did his stablemate, a Booroomooka CO son sold yesterday for $80,000. That calf sold to another syndicate including Witherswood, Gilmandyke and Cheralton Farms, WA.

In total, 88 bulls out of the 105 offered yesterday by Millah Murrah made $10,000 or more. As well as the ‘older’ sireline genetics involved in the two top priced lots, another contributing factor was the first offering of several new sire-lines to the Angus industry, such as Matouri Reality out of New Zealand, and EF Compliment and Thomas Upriver out of the US.

The result eclipsed Millah Murrah’s own record average for Angus set last year at $9147, and the all-comers record set in 2006 by Queensland’s Palgrove Charolais Stud, which set an average of $11,412 for 188 bulls.

“That perhaps flies in the face of some of the theories about lower demand due to the decline in cow numbers,” he said, while en-route to today’s Reiland Angus sale at Gundagai.

“But I think a lot of people are taking the opportunity this year to change over older bulls, for which they can get very, very good meatworks value. They possible also think prices for replacements could get dearer-still next autumn, so I think going further into spring, we will just continue to see things strengthen.”

Mr Glasser said that his observation, over 25 years in the stud stock game, was that the bull market tended to be 12 to 18 months behind the trends occurring in the commercial world.

“On a rising slaughter and store cattle market, we’re often a year behind capturing that trend, which might suggest that bull prices next year could be considerably higher again. But equally, bull sale prices often lag well behind, as the commercial cattle markets starts to fall.”

“That means the best of the market for the bull job is probably yet to come – especially if we can defy the El Nino predictions and get a spring season across eastern Australia,” he said.

“There’s just enormous confidence out there in the beef industry at the moment,” he said.

“People want the best possible genetics to drive their herd performance, given what they see lying ahead, price-wise.”

Mr Glasser said the southern spring bull selling circuit was now drawing to a close, with attention starting to shift further north and into Queensland.

Some of the notable recent spring sale results recorded in NSW and Victoria have included:

As described in the attached table, plotting results for sales in which GDL was engaged, average sale price for bulls in Queensland so far this spring has been $5552, up from $3524 last year.

“We now look forward to a busy September with 20 sales in the month,” GDL’s Harvey Weyman-Jones said.

“Rain in the last week of August and start of September across parts of southern and central Queensland will improve the already record beef prices, so we should see bull prices hold up or maybe increase for the remainder of the 2015 spring bull season,” he said.

Generally numbers offered per sale had reduced from last year due to hard culling from stud breeders.

“This year, supply and demand have been better matched, and with the higher beef prices this has created increased competition resulting in higher bull sale averages,” Mr Weyman-Jones said.

In an interesting development, which augers well for the upcoming Nindooinbah sale, the Bondfield’s 24 Ultrablack bulls sold to a top of $16,000 to average even higher than the Charolais portion at $8000.