‘One-percenters’ add up for Feedlot of the Year award winners ATTENTION to detail and those small ‘one percenters’ that add up to outstanding performance were recognised among three commercial feedyards announced as the 2016 Elanco Lotfeeders of the Year at the Australian Lot Feeders’ Association’s BeefEx conference last night.

NH Foods Whyalla feedlot near Texas, on the Queensland/NSW border was named Elanco Feedlot of the Year for yards above 10,000 head category for 2016.

“Our staff is our strength and special mention should be made of our long term staff who provide the training and encouragement to our more recent members,” manager Gino Destefani said. “Special thanks must go to our related subsidiaries and our parent company NH Foods. We would also like to thank our panel of consultants and advisors,” he said.

“Just as important are our customers and suppliers who continue to work with us to improve – even during trying times.
We believe that all the finalists are exceptional operations and it would be naive to assume we are superior in any way. On any given day we all have strengths and weaknesses. Today must have been our day. We love our feedlot, we love our industry and we have great pride in the beef we produce,” he said.

With a capacity of 55,000 head, Whyalla and its 90 employees turn off more than 140,000 cattle a year for processing at the company’s Oakey and Wingham beef plants.

The majority of the beef is destined for Japan where it is sold under brands including Oakey Angus Reserve, 1788, 1788 Platinum and Wingham Gold.

The 2016 Feedlot of the Year award winner in the 3000-10,000 head category was Camm Agricultural Group’s Wonga Plains feedlot,  an integrated beef enterprise across nine Queensland properties. The Camm family have been feeding cattle at Wonga Plains since 1975 and run a number of specialist programs, including Wagyu. 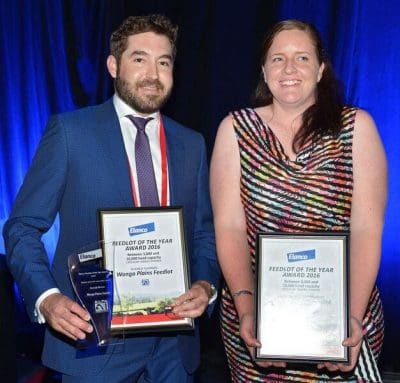 Bryce Camm, when accepting the award, paid tribute to his parents, David and Judy, who started out bag feeding small pens of cattle in the early 1970s. “It was their vision, coupled with the support we have from our team of employees and advisors which helped get us to where we are today,” Mr Camm said.

Weeroona Feedlot at Guluguba on Queensland’s western downs was announced at the feedlot of the year for yards less than 3000 head capacity. 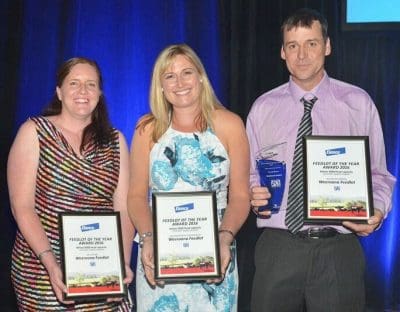 Cait Jenyns, Elanco (left) presents the Feedlot of the Year Award for the under 3000 head category to Tammy and Tim Stiller, Weeroona feedlot.

Tim and Tammy Stiller run the feedlot as part of an integrated family breeding, backgrounding and feedlot business on 20,000 hectares.

Weeroona consistently achieves 98pc compliance to the market specifications of long term customer Woolworths, with whom they have had a fortnightly supply contract since 1992.

The runner up in the less than 3000 head category was Freestone feedlot – a custom feeding service located near Warwick, Queensland. The yard specialises in veal meat production and has an adjacent backgrounding facility.

The Feedlot of the Year Awards are delivered by ALFA in conjunction with AusMeat, with support from Elanco, and are designed to celebrate a commitment to quality management systems and best practice across beef cattle feedlots of all sizes.

As part of last night’s industry celebrations, ALFA presented an honorary Life Membership to former general manager of the Rangers Valley feedlot, Malcolm Foster, who was also a long-time ALFA councillor who served as president over two cycles. 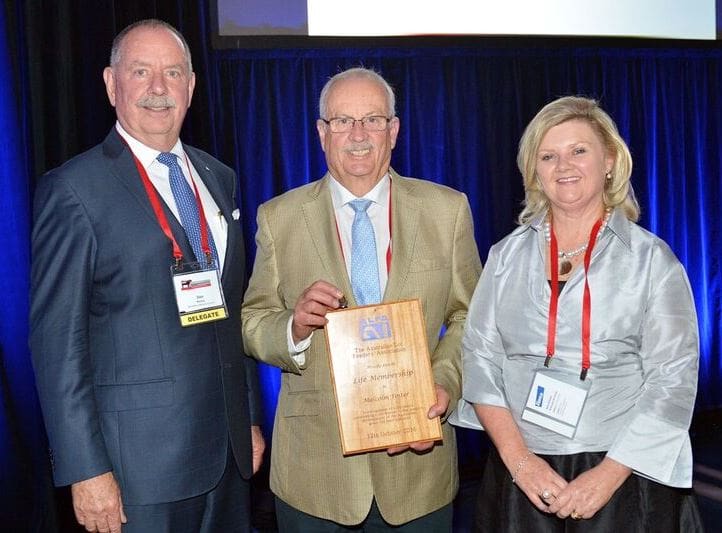 The award was presented by Don Mackay, chair of the Red Meat Advisory Council and also a past President of ALFA. Mr Mackay spoke of Mr Foster’s numerous achievements, saying he had contributed significantly to the lotfeeding sector.

In his acceptance, Mr Foster said he had got as much, if not more, out of ALFA than he had put in.

“It has been an honour to serve my industry,” Mr Foster said. “You do it because you are committed to the industry and you want to make it better, and I encourage people to do the same and get involved.”