Mr Campbell’s Beef 2015 championship winners were calves virtually off their mothers, having been run on heavy sand over clay country, carrying mostly clovers and ryegrass, spending their final period on a sacrificed abundant ryegrass hay paddock.

The calves exhibited prodigious weightgain for age, with the winning pen averaging 236kg dressed weight at ten months of age. The reserve champion pen was even heavier at 240kg. Both pens were processed at Dardanup Butchering Co, Dardanup, WA.

Entries from all points of the compass were received for what became Australia’s first truly national beef carcase competition at Beef 2015, which concluded with a presentation dinner last night.

The event provided a unique opportunity for beef producers from across Australia to benchmark their product on a national level, as well as receiving invaluable feedback on their entries’ performance in meeting market specifications, yield of saleable meat, and predicted eating quality.

Last night’s Cooara trophies were collected on Mr Campbell’s behalf by his immediate neighbour, Michelle Fleming, who travelled 5500km to Rockhampton to compete with her own stud heifer (click here to read Beef Central’s earlier story). 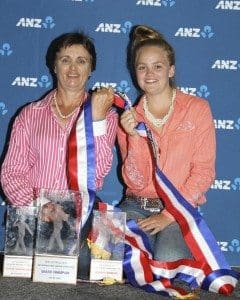 Collecting the champion and reserve champion carcase pen trophies on behalf of neighbour, Bruce Campbell were Michelle Fleming and daughter, Tanya. Click on image for a larger view.

“I would have loved to be there myself, but with cows calving and a bit of a false-break going on, it was impossible to get away,” Mr Campbell said.

Almost 600 cattle representing breeders and processing plants from every Australian state were represented in this year’s carcase competition.

Mr Campbell’s championship winners were all home-bred, mostly using polled Charolais genetics tracing back to North American and Canadian semen. Between 60 and 100 cows go into an AI program on the property each year.

Turnoff cattle are either sold as weaners in the local store market, or fed-on, seasons permitting, for sale as grassfed MSA trade steers to local abattoirs including Dardanup and Harvey Beef.

“I just like messing around with carcase competitions,” Mr Campbell said. “It provides us with a good pointer as to how our cattle are going, and the level we’re at.”

“I had a selection of calves to choose from, and just narrowed the final pens of three down when I brought them closer to home,” he said. “I tend to rate my cows pretty highly, so in order to mate bulls to match the quality of my females, I prefer to use AI, instead of paying big money for bulls.”

“But we’ve never won any carcase competition at this scale before. It came as a complete shock,” he said. “It’s such an honour, I’m thrilled.”

“We’ve been breeding those terminal crossbred calves ever since, although we sometimes keep the F1 females, either to mate back to Angus bulls, or to Blondes,” he said. 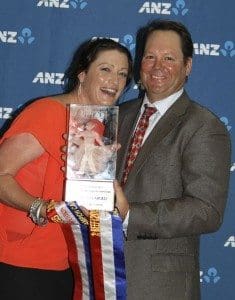 The milk-tooth steer had a carcase weight of 334kg; an oss score of 110; marbling score of 1; and 103sq cm eye muscle. The Manchee steer was processed at Kilcoy Pastoral Co.

This year there were six classes open to grain and pasturefed steers and heifers, ranging from 180kg to 420kg carcase weight to cover domestic to export categories.