Intrepid WA exhibitors will travel 5500km to compete at Beef 2015

IF THERE is such a thing as a long-distance exhibitor award at Beef 2015, it will surely go to two intrepid Western Australian stud breeders who will bring their respective Gelbvieh and Charolais entries more than 5500km across the Nullabor to compete.

Michele and Barry Fleming from Glendale Stud near Serpentine, not far from Perth, have entered a single Gelbvieh heifer in stud beef classes at Rocky. 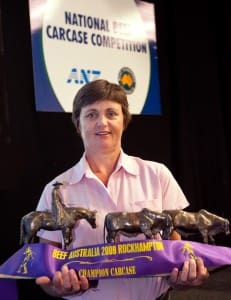 The couple are making their debut as live cattle exhibitors at the Beef Expo, but have fond memories of winning the Beef 2009 carcase championship six years ago, with pen of Gelbvieh cross steers processed at Daadanup Butchering Co.

The Flemings have bred Gelbvieh since 1992, selling most of their bulls to commercial cattle breeders in WA’s southwestern corner for use over Poll Hereford, Shorthorn, Angus, Murray Grey and crossbred cow herds to produce baby beef for the Perth market.

“We were always going to come across to Beef 2015 for a look anyway, and an opportunity came up to bring a heifer across to the East Coast, compete with her firstly at the Royal Easter Show in Sydney, and then heading north to Rockhampton for Beef 2015 competition,” Michele Fleming said.

The heifer will be offered at the Beef 2015 stud sale (sale yet to be confirmed, as entries are still being sought) with proceeds going to the Australian Gelbvieh Association.

While the Flemings’ Glendale Stud prefix has been represented at previous Beef Expos in Rockhampton, they were cattle that had been sold earlier to Queensland Gelbvieh breeder, Julie Nixon. In 2009, one of those entries was judged calf champion heifer.

Because of its sheer size, stud beef championships at the Beef Expo in Rockhampton are divided into three divisions, for calf, junior and senior age divisions. All other stud beef shows in Australia carry broadribbons for senior and junior champions only. At this point, Gelbvieh entries for Rockhampton this year total 30 head.

The Flemings have again entered a pen of steers for the Beef 2015 carcase competition, processed  and graded recently at the Daadanup Butchering Co (see Beef Central’s recent report on the lead-up to this year’s carcase competition.)

Also exhibiting at Beef 2015 this year will be keen WA Charolais breeders, Andrew and Anne Thompson.

The couple and their son Harris established their Venturon stud prefix in 1994 – a successful and expanding Charolais seedstock and commercial herd at Boyup Brook, 300km south of Perth.

This will be their third consecutive competitive outing in the Rockhampton Beef Expo’s stud beef rings, having sent stud heifers over previously in 2012 and 2009.

The young heifer they exhibited and sold in Rockhampton three years ago, bought by Chris Knox’s DSK Charolais Stud in NSW, went on be judged grand champion female at last year’s Royal Easter Show in Sydney. Her first calf was sold at the National Charolais sale this year, making around $7000.

There’s a strong showing of Charolais expected in the stud beef ring at Rockhampton this year, with entries so far totalling almost 100 head.

This year’s Venturon heifer competing in Rockhampton is also catalogued for the event’s stud sale, should it go ahead.

Both WA exhibitors are adopting the same strategy of competing first at Royal Easter Show in Sydney next month, before heading north to Rockhampton.

The Flemings’ Gelbvieh heifer and the Thompsons’ Charolais heifer will do the trip from Perth to Sydney with Doug Giles from Quicksilver Transport based near Newdegate, who has done the drive for the past three Beef Expos. The Perth-to-Sydney leg takes two days, with a spell near Adelaide, and the Sydney-Rockhampton leg will also take the equivalent of two days. In total, the journey is some 5500km.

From Sydney, they will join custom-fitter, Steve Hayward’s show team, in preparation for Rockhampton a month later.

“We’ll be in Rockhampton for the whole week – we love it,” Anne Thompson said.

“There’s quite a contingent of WA beef people making the trip across for a look this year, including some junior members,” she said.

“When we get there and see our little heifer out there competing against the best Charolais cattle in Australia, it’s pretty exciting.”

“It’s the ultimate, really – it’s only once every three years, and to think that there are cattle from studs 5000km apart in the same ring is pretty special. With nearly 2000 stud cattle assembled, its really something to look forward to,” Anne said.

“Doing well at something like that is a great accolade. But we did not enter with the expectation of necessarily winning – it’s about participating in the greatest cattle event in the nation,” she said.

“We want to be a part of it, and it helps showcase the quality of cattle we have back in WA.”

The Thompsons’ 17-year-old son, Harris, is also passionate about the cattle industry, and the event presented a huge learning and education opportunity for him, as well as themselves.

“There is nothing else like it – from one end of the showgrounds to the other it is wholly-focussed on the cattle and beef industry, in one way or another. There are so many different events that we can attend and learn from, and that’s part of what we will be doing this time – everything from property tours to seminars and scouring the commercial display area. It’s an amazing learning experience,” Anne said.