From Indianapolis to Rockvegas: Elanco’s Jeff Simmons beams into Beef 2015.

Rocky is teeming with bulls, big hats and no vacancy signs, and beef’s biggest week is only just getting warmed up.

The feature of the first day of Beef 2015 was the beef industry symposium in a superbly decked out sports stadium, where 300 attendees dined on JBS branded beef and heard from a diverse range of industry and international speakers.

The local Federal member for Capricornia Michelle Landry opened the event by declaring war on any other town that would claim the beef capital title: “Despite what others may claim, there is no other Beef Capital in the Southern Hemisphere,” she proclaimed to a sea of nodding, approving faces. 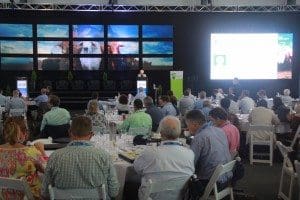 Ms Landry also noted that this week’s event marks a year since the industry lost a giant of the Central Queensland beef community, Graeme Acton, who tragically died after a campdrafting accident in May 2014.

A common thread binding the narratives of speakers yesterday wove around the need for the Australian beef industry to continue to differentiate and market its product on quality, emotively-based and consumer focused attributes to capture the premium returns available from higher value markets.

Marketing expert Craig Davis encouraged the industry to “think better, not bigger” and take a leaf out of the book of luxury brands, but not a lettuce leaf from the plate of a wafer thin catwalk prancer.

For Australia already suffered from “supermodel syndrome”, he said, in that it was blessed with natural gifts, ogled wherever she goes and suffered from the illusion the world revolves around her. 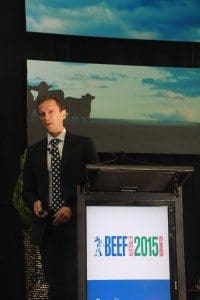 In reality, Australia’s beef production amounted to little more than a ‘snack’ for China. We can only capitalise on the opportunity to become “Asia’s food bowl”, he said, by working harder to tell the Australian story well with ‘clever, coherent and consistent brand thinking’.

Despite a few momentary technical hitches the trans-pacific video gods smiled on the symposium’s ambitious attempt to beam in a speaker from the US. Speaking to a camera in a room in Indianapolis, Elanco boss Jeff Simmons gave a thoroughly engaging and inspiring address on why meat matters if the world has any chance of feeding its rapidly growing global population.

United States based Senior Director of McDonald’s Worldwide Supply Chain Gary Johnson told the forum that while it was no secret the Australian beef industry was one of the best in the world, it needed to embrace total transparency and share its compelling story of sustainability to engender and maintain consumer trust.

United States Under Secretary for Agriculture Alfred Almanza told the symposium, which was supported by CQUniversity Australia, of the challenges industry faced in the complex field of international food safety law, and its impacts on product recalls through to access to export markets.

Coles’ Allister Watson also emphasised the need for the industry to focus on giving customers what they want.

In one of the more provocative speeches live exporter Scot Braithwaite from Wellard laid down a direct challenge to the meat processing industry, telling the forum that the live export trade is better positioned to capture more of the Australian beef cattle herd in future than on-shore processors because it was more efficient. 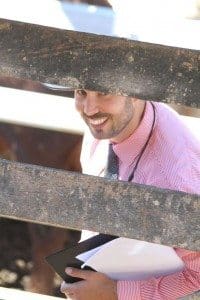 The expo kicked off on Sunday with the judging of more than 1200 head in the Ruralco Commercial Cattle Championships at the Central Queensland Livestock Exchange at nearby Gracemere.

“The quality of cattle entered by producers was outstanding given the volatile seasonal conditions we’ve endured over summer, and it was great to see they were rewarded for their efforts with exceptional prices at today’s sale,” Beef Australia chairman Blair Angus said yesterday.

“The competition was designed to test producers’ ability to turn off cattle that precisely meet the real-world specifications set by meat buyers and they have come through with flying colours.”

More than 600 trade sites located around the Rockhampton Showgrounds also opened for business today, and close to 1000 international visitors are registered to attend the event this week.

A beefy start to a week-long event that celebrates all that is great about an industry that generates a massive $12.75 billion in off-farm value for Australia’s economy.

Day two highlights will include: