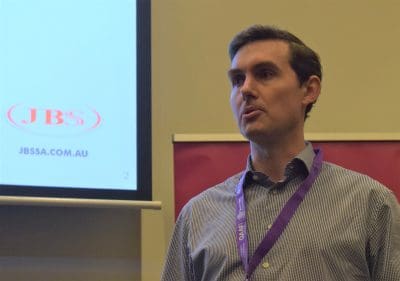 THE world’s largest meat processor, JBS, has highlighted some of the hurdles the company will need to overcome to reach its environmental target of “net zero emissions by 2040”.

JBS is currently going through the baselining phase of its target, taking stock of all its emissions across the supply chain. The net zero target is different to carbon neutral and has tight controls on the purchasing of offsets – the target will include producers selling cattle.

Speaking at the TropAg conference in Brisbane earlier this week, sustainability manager Sam Churchill said the company was still trying to work out how it planned to reach the target.

“It’s kind of like putting a man on the moon, we don’t know how we are going to get there but we need to start the journey and chart the course,” Mr Churchill said.

“Most of our full value chain emissions come from the paddock and most of it is attributable to livestock.”

JBS has made several commitments to help reach the 2040 target, including:

“The biggest challenge for use with the deforestation target is in Brazil where the supply chains are incredibly opaque and it is really hard to track the cattle back to the point of origin,” Mr Churchill said.

“But there is a huge amount of work happening in those supply chains in Brazil and we hope to make some progress there soon.”

These credits will be worth a lot of money

Like many beef companies looking to make sustainability claims, JBS will need its suppliers to keep the carbon credits they generate so they can be claimed against the livestock. Mr Churchill said incentivising producers to keep credits will be a challenge.

“These credits will be worth a lot of money to producers,” he said.

“Whether they are doing soil sequestration, vegetation projects or feeding supplements to their livestock they will have an opportunity to sell them outside the supply chain. It is still a great outcome, because the reductions are real but it is a challenge for emissions accounting.”

Australian Carbon Credit Units are currently hovering around the $30 mark after almost reaching $60 earlier in the year. While some hurdles are in front of the market, many are forecasting it to keep increasing for the next 10 years.

Mr Churchill referred to Microsoft’s purchase of soil carbon credits from farms across New South Wales in 2019 – which meant the credits could not be claimed by the beef supply chain. He said the company was still trying to work out how it would incentivise producers to keep the credits.

“There is no simple answer at the moment and there is no real answer as to how it will be handled from a carbon accounting point of view,” he said.

“This is something the industry needs to discuss and work out – these accounting issues are not trivial.”

JBS has partnered with Dutch company DSM to facilitate the development of a methane-reducing feed additive called Bovaer.

Mr Churchill said more work was needed to enable the use of the supplements on a commercial scale.

“It is great to see the development of the feed additives and it is something that gives us hear that there is progress and opportunity being made,” he said.

“We really need to address the cost of these supplements because we need a real incentive for producers to use it.”

Using the feed additives in grazing systems has also been flagged as an issues, with prominent agricultural scientist Richard Eckard last week telling Beef Central more investment was needed. Mr Churchill said getting the additives into paddocks was the main priority for JBS.

“You think about the animals that are grazing in outback Australia that don’t see people for years. How are we going to get feed additives into them?,” he said.

“Most of the cattle in Australia are in grassfed systems, so if we need a solution to get it to them.”

With food production being the main business for JBS, Mr Churchill said the company was not willing to compromise production to meet the target.

“At the moment, the easiest option for many producers to sequester carbon is plant trees,” he said.

“While that is a good outcome to some degree, at some point it had a negative trade-off on food production. If Australia sacrifices food production to plant trees at scale than that food will need to be produced elsewhere and the environmental consequences could be significant.”

Mr Churchill said the company would like to see measures that increase carbon sequestration and agricultural production.

“That is the best outcome for the world and we have heard some great examples with that around soil sequestration,” he said.

“I would encourage everybody in the supply chain to take stock of emissions, understand where they are and look for removals.”