Beef 2018 Pitch in the Paddock winners – where are they now?

LAST year’s Pitch in the Paddock at Beef 2018 at Rockhampton showcased some of the hottest ideas in the beef industry.

The inaugural Pitch in the Paddock was designed to “support, enhance and add value to start up and scale up companies within the beef sector”.

So where are they now?

The Pitch in the Paddock winner was ProAgni which pitched a probiotic additive which could cut the use of antibiotics in feedlots, with judges impressed with the impact it could have for the beef industry. 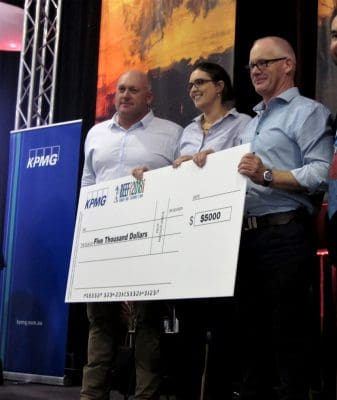 Robert Bell, Fiona Soulsby and Lachlan Campbell, all from ProAgni, first place winners in the Pitch in the Paddock at Beef 2018 in Rockhampton.

The probiotic supplements were touted as a means of allowing a quicker adoption of the rumen to grain feeding without using antibiotics.

A year down the track, ProAgni’s Robert Bell said they had successfully stabilised and packaged the probiotic so it did not need cold chain storage.

“We have proved the products ability to re-awaken in the rumen and establish a population density that maintains rumen pH when animals are rapidly introduced to a full grain diet,” Mr Bell said.

The trials were run in simulated rumen conditions and will be further tested in live animals this year.

“We expect that during these trials, animals will transition to grain rapidly (within days), with stable rumen pH and good animal health, and will establish weight gain within the first week,” Mr Bell said.

“Grain rations will be free of all antibiotics and ionophore compounds – this will be game-changing for the industry.”

Once the trials are complete, the product will be commercialised.

ProAgni’s Lachlan Campbell said the Pitch in the Paddock was the launchpad for the company’s work with probiotics in the feedlot industry.

“We received significant independent and commercial validation, that the technology we were developing had economic social an environmental value,” Mr Campbell said.

“It was also apparent that our solution was scalable across both domestic and international markets, with further adaptation and opportunity in the pig and poultry markets.”

ProAgni already has another patented product on the market – ProTect C, a pellet which is fed continuously with cereal grain supplements for use in feedlots and drought lots, for supplementary feeding or at weaning.

ProAgni co-founder Fiona Soulsby said ProTect has already reduced the number of animals which were traditionally grown out on grain with antibiotic inclusion.

“Producers are not only buying our product because it is antibiotic free – they are rebuying it …. because it makes them money,” Ms Soulsby said.

“It improves their feed efficiency and resource utilisation, animals perform better and it now also gives them a social license to sell product that is grown antibiotic free.”

The runner up title went to a meat quality instrument called the MEQ probe, developed by Jordy Kitschke and Nick Van Den Berg. 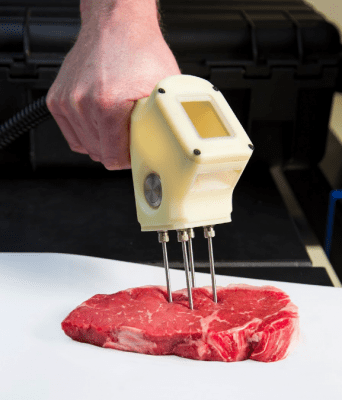 The probe was pitched as a device which could provide objective measurements of eating quality to beef producers, retailers and processors.

“The technology used in the probe came from the medical industry and has been utilised to determine meat eating quality – it measures pH, intramuscular fat and sheer force,” Mr Kitschke said.

He said featuring the MEQ on a national stage at Beef 2018 had helped its development.

“It helped us in terms of meeting industry representatives while we were at the vent and from people reaching out afterwards,” Mr Kitschke said.

“The event helped to build national and international networks which we’ve continued to engage with.”

After Beef 2018, the MEQ team began a project with Meat and Livestock Australia to collect more date to finalise the algorithms on the probe.

“We are now in the final stages of testing these predictive algorithms on different types of beef and lamb,” Mr Kitschke said.

The MEQ probe was unashamedly a start up company and Mr Kitschke said one of the benefits was the speed which it could move as a company.

“Like all technology development, there are always plenty of challenges along the way … but we have a brilliant team that gels well together, that can take feedback, identify the problem and solve it quickly,” he said.

That velocity means the MEQ probe is close being commercially available.

“We are looking to begin a beta-roll out (early) soon, with plants installing the technology around the country,” Mr Kitschke said.

“We expect the probes to be ready for full-scale commercial roll out early next year.

“We have been really fortunate to have the support of a lot of great industry partners.

“People are excited to have access to our technology, as something like the MEQ probe has never existed before, so it opens a lot of doors for them.”

The people’s choice award in the Pitch in the Paddock went to Fluxx, an app which will match a freight delivery request with someone ravelling to a farmer’s location, lowering the carbon footprint and saving time and money.

The app pairs the freight request with a pick-up person.

Fluxx Developments Pty Ltd director Nick Dyer said Pitch in the Paddock was a great experience, allowing him to draw on the knowledge of experienced business people.

But tough seasonal conditions have stalled the development of the app.

“As a result of the 2018 drought and the horrible year it was for agriculture, some investors were forced to withdraw and we lost some of our funding,” Mr Dyer said.

“We are currently in the final stages of testing our app and are about to roll out a large-scale beta test in Central Queensland.”

Fluxx will launch in a defined area in Central and Central Western Queensland in the next few months and will be allowed to “grow organically to all of Australia”, Mr Dyer said.

“Regional Australia is in much need of P2P (peer to peer) technology platform,” he said.

“In particular, we believe the P2P model fits perfectly with trying to solve the problem of regional sustainability.”