Winter wonderland in pictures, as parts of Eastern states blanketed in rare snowfalls

THIS week’s blast of antarctic air has delivered snowfalls across parts of Victoria, NSW and even elevated southern fringes of Queensland that rarely see it. 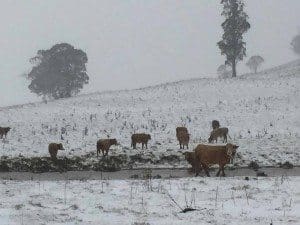 The snow made it to within 20km of the Queensland-NSW border, spreading a light dusting over Mount Mackenzie, near Tenterfield.

There’s still hope for a relatively rare Sunshine State snowfall, with the Bureau of Meteorology giving the Granite Belt centred on Stanthorpe, some 2200 feet above sea level, a 20-30 percent chance for snow today or tonight.

Blizzard-like conditions are continuing across much of the high country above 600 metres in NSW and Victoria.

The white blanket that attracted visitors from many areas to the snow regions is quickly becoming a problem for cattle producers, who in some areas may have to start hand-feeding stock.

A major cold front has brought strong winds and a light dusting of snow across many parts of New South Wales, with several highways in the New England region being closed due to the snowy weather and treacherous roads.

ABC News reported that three loads of cattle were stranded in the Northern Tablelands town of Walcha, that were destined for sale in Gunnedah tomorrow (Tuesday). There were reduced sheep and cattle yardings in Tamworth partly because of the road closures.

The Bureau of Meteorology says the low-pressure system could last for most of the week.

Bureau of Meteorology issued a number of weather warnings over the weekend. BOM NSW regional director Barry Hanstrum said the conditions were associated with a series of cold fronts that began moving through the state on the weekend, and into this week.

Temperatures are dropping to single digits or below zero across the south east during the nights and mornings. The fronts are bringing snow to the Australian Alpine region, extending right along the Great Dividing Range on Sunday and Monday. This included areas such as Orange, Lithgow, Jenolan Caves, Armidale, Glen Innes, and Barrington Tops.

Click on gallery below to see more images of snowfalls in rural areas across Eastern Australia.