Warmer winter ahead for most of Australia

Most Australians are in for a warmer than average winter, according to the latest seasonal outlook released today by the Bureau of Meteorology. 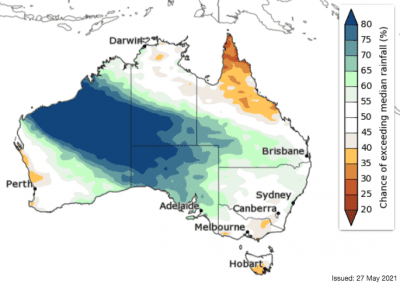 Although winter is the dry season in Northern Australia it could have more rain than usual over the coming months, while parts of southern Australia could be drier than average.

Bureau Climatologist, Dr Lynette Bettio, said this was consistent with observations from the past 20 years, which show a trend towards drier than average conditions in Australia’s south during autumn and early winter.

“Warmer ocean temperatures to the north of Australia may increase the moisture available, enhancing rainfall and resulting in a wetter than average dry season across much of northern Australia but as it is dry season, rainfall totals will not be high.”

Autumn has been wetter than average for certain parts of the country, including for most of New South Wales, southern Queensland and coastal Western Australia.

“New South Wales had its second wettest March on record, with the extreme rainfall and severe flooding late in the month,” Dr Bettio said.

“Meanwhile, some areas of Victoria and South Australia have missed out on their usual autumn rainfall.”

It was the coolest autumn for most of Australia since 2015.

“Cool conditions would have been felt particularly keenly by residents in inland New South Wales, who recorded minimum temperatures one to two degrees below average,” Dr Bettio said.

To determine above and below average the observed data is compared to data for the 1961-1990 period. This period is recognised by the World Meteorological Organization as suitable for assessing long-term climate variability and change.

The latest outlooks are available on the Bureau’s website.