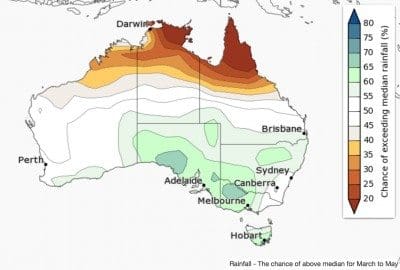 Autumn rainfall is likely to bring above average rainfall to Australia’s southeast, except eastern NSW and eastern Victoria, while the tropical north is more likely to have a drier than average three months, the Bureau of Meteorology’s latest three monthly seasonal climate outlook statement issued today suggests.

March is likely to be drier than average across northern Australia and parts of southeast mainland Australia.

Historical outlook accuracy for March to May is moderate to high over eastern and northern Australia as well as parts of western WA, with mostly low accuracy elsewhere.

In the northern tropics, March and April are the last months of the wet season. On average, April tends to receive much less rainfall than earlier wet season months. The current outlooks suggest the northern wet season is likely to end much drier than average.

For the three-month period (March to May), daytime temperatures are more likely to be above average across the country, except for northern and central SA, western NSW and western WA where the chances of a warmer or cooler season are roughly equal.

Nights are favoured to be warmer than average nation-wide, except near Carnarvon, with a greater than 80% (or an eight in ten) chance of warmer nights for much of the country.