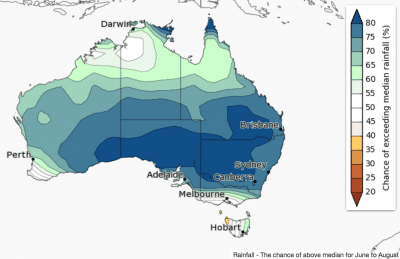 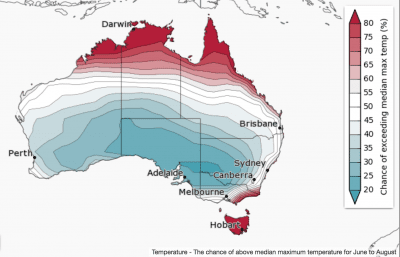 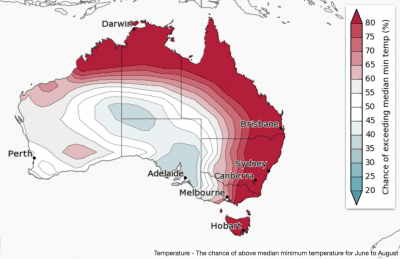 Above average rainfall is expected for large parts of mainland Australia from June to August, according to the Bureau of Meteorology’s latest three monthly seasonal climate outlook statement, released this morning.

Daytime temperature outlook points to warmer than average conditions for the tropical north and parts of southeast Australia, and cooler in the southern mainland.

The tropical Pacific has now returned to neutral levels, marking the end of the 2015–16 El Niño. By July, the model suggests the Pacific may have reached borderline La Niña conditions, which is contributing towards the above average rainfall outlook.

The breakdown period of the El Niño cycle typically sees warmer nights across much of Australia, and warmer days in the north.

Sea surface temperatures across much of the Indian Ocean are above average, as well as waters surrounding northern and eastern Australia. These waters near

Australian have warmed due to the breakdown of El Niño in recent months. The warmer waters in the Indian Ocean may provide extra moisture for rain-bearing systems as they cross Australia.

Additionally, by the end of June, the model indicates an increased chance of a negative Indian Ocean Dipole. This typically brings above average rainfall to southern parts of Australia. However, this influence is likely to be off-set somewhat by a predicted increase in mean sea level pressure to the south of Australia, with southwest and southeast parts of Australia showing roughly equal chances of a wetter or drier three months.

It should be noted that over the tropical north of Australia, it is seasonally dry at this time of year. The median rainfall at many tropical locations is between 0 and 1 mm for June to August, and even a small amount of rain would exceed the median.