Mostly neutral start to 2016, but reduced wet season rains likely in the north 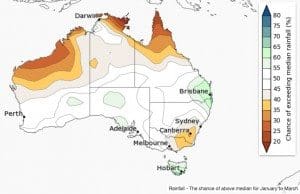 For most of Australia the chance of above or below average January rainfall is roughly equal, with below average rainfall more likely in patches of western WA, the far tropical north and the southeast, according to the Bureau of Meteorology’s latest seasonal climate outlook report.

Current climate influences include a combination of a strong El Niño in the Pacific and very warm Indian Ocean temperatures.

Historical outlook accuracy for January to March rainfall is moderate over most of Australia, except southern parts of WA, and parts of the interior where accuracy is low to very low. 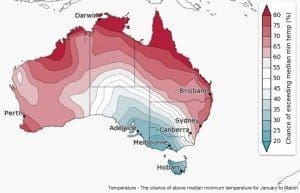 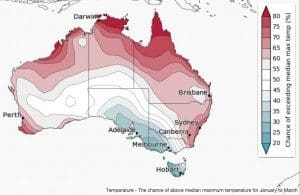 January is climatologically the warmest month of the year for Australia. The outlook for January shows maximum and minimum temperatures are likely to be warmer than normal across northern and eastern Australia, and WA. Conversely, days and nights are likely to be cooler during January in parts of the southeast.

Current climate influences include a combination of a strong El Niño in the Pacific and record-warm temperatures in the Indian Ocean.