Click to watch a short video presentation of the Bureau’s seasonal climate outlook for Spring 2015. 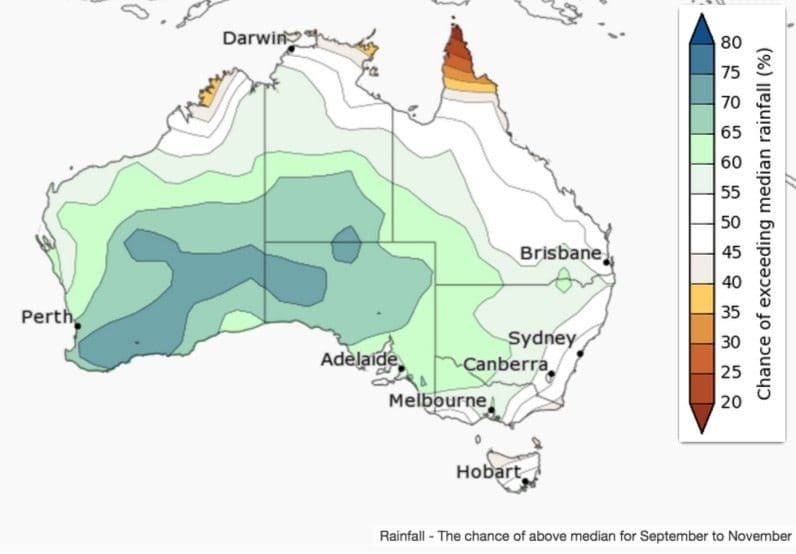 A wetter-than-average spring is more likely in western and central Australia, while in the east and north there is an equal chance of above or below average rainfall, according to the Bureau of Meteorology’s latest three month seasonal outlook, released this morning.

Wetter in the west and centre

There is an increased chance of a wetter-than-average season over much of southern and central WA, the southern NT, SA and extending into parts of western NSW Victoria and Queensland. In far north Queensland, spring is likely to be drier than average. Most of eastern Australia has a roughly equal chance of a wetter or drier season.

The current outlook reflects the record warm sea surface temperatures in the Indian Ocean, and a strengthening El Niño in the Pacific.

Historical outlook accuracy for spring is moderate to high over most of Australia.

Warmer spring nights for most of the country

Significantly warmer-than-average sea surface temperatures in the Indian Ocean and nearer the Australian coastline are likely influencing the warmer overnight temperatures expected for much of the country. The northern rainfall onset occurs when enough rain has fallen to stimulate plant growth after the dry season. This is defined as the date after 1 September when a location has received a total rainfall accumulation of at least 50 mm. The outlook is the percentage likelihood of the rainfall onset beginning earlier than normal.

Today’s statement says the early onset of northern rainfall is likely across central parts; while a later onset likely for west and far northeast.

There is an increased chance of earlier-than-normal rainfall over central and southern parts of the Northern Territory and southwestern Queensland.

Over parts of the Pilbara, Kimberley, and northern Cape York Peninsula, the first rains are likely to be later than normal.