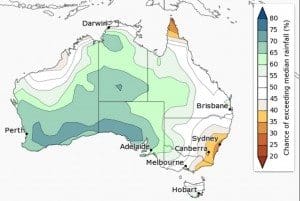 The rainfall October to December is likely to be wetter than average over southern WA, most of the NT, SA, and southwest Queensland, according to the Bureau of Meteorology’s latest three month outlook released this morning.

Conversely, the northern Cape York Peninsula in Queensland, eastern Victoria and southeast NSW are likely to be drier than average. Elsewhere, the chances of a wetter or drier three months are roughly equal.

For October, places which are likely to have a drier than average month include the tropical north, parts of the Pilbara in WA, southern Victoria and northern Tasmania.

The current outlook reflects a combination of very warm sea surface temperatures in the Indian Ocean, and a mature El Niño in the Pacific.

Historical outlook accuracy for October to December is moderate over most of Australia.

Warmer nights for most of the country

Overnight temperatures are likely to be warmer than normal across most of the country except in the southeast and parts of the tropical north, where the chances are roughly equal. Across the southwest of Australia, extending into SA, there is a strong likelihood of above normal night-time temperatures (greater than 80% chance in places).

The current outlook reflects a combination of very warm sea surface temperatures in the Indian Ocean, and a mature El Niño in the Pacific.