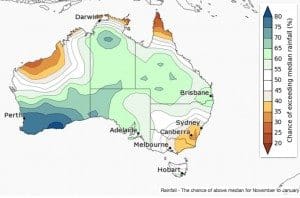 The three month period from November to January is likely to be drier than average across parts of Victoria, NSW, the Pilbara region, and across Cape York, according to the Bureau of Meteorology’s latest three month outlook released today.

Wetter than average conditions are favoured across the central and southwestern parts of the country. However, the Bureau states that for much of this wetter-than-average area, including western Queensland, accuracy is low at this time of year. Caution should be exercised when using the outlook in areas of low accuracy.

The November outlook shows a drier than average month is likely in the lead up to summer across parts of southeast Australia, with much of northern Australia likely to experience a drier than normal start to the northern wet season. Much of WA is likely to have a wetter month, though it should be noted that southern areas are climatologically dry at this time of year.

The current outlook reflects a combination of a strong El Niño in the Pacific, a decaying positive Indian Ocean Dipole, and very warm Indian Ocean temperatures.

Historical outlook accuracy for November to January is moderate to high over eastern and western parts of Australia, and parts of the Top End of the NT. Across central Australia, extending from eastern WA to western Queensland, and much of SA, accuracy is low.

The November outlook shows maximum and minimum temperatures are likely to be warmer south of the tropics.

Daytime temperatures for November to January are likely to be warmer than average along much of the coast of southern Australia and large parts of Victoria and NSW, but cooler in the central NT.

Overnight temperatures are likely to be warmer than normal across much of the country except in parts of the tropical north and western Victoria, which have an equal chance of warmer or cooler nights.