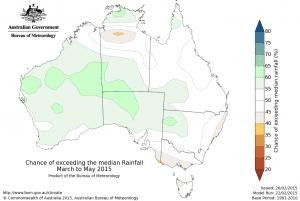 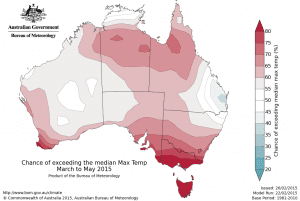 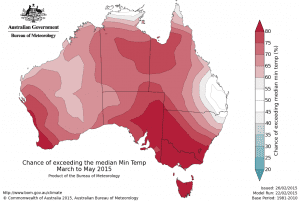 Central Australia and parts of Central Western Australia are expected to experience a wetter than normal March to May period, according to the Bureau of Meteorology’s latest three monthly seasonal climate outlook released this morning.

Elsewhere, the chances of a wetter or drier season are roughly equal.

The outlook for March shows a wetter than normal month is likely over the Top End and areas near the Queensland-NSW border.

Climate influences include residual warmth in the western tropical Pacific Ocean, and warmer than normal waters in areas to the south and west of Australia.

The bureau rates the historical outlook accuracy for March to May as moderate over eastern and northern Australia, and parts of western WA, with mostly low accuracy elsewhere.

Daytime temperatures for March to May are likely to be warmer than normal along the western and southern coastline of WA, much of northern Australia, and all of southeast Australia.

Nights are also likely to be warmer than normal for most of Australia, except for northern parts of the Top End of the NT, and southeast Queensland.

Climate influences include residual warmth in the western tropical Pacific Ocean, and warmer than normal waters to the south and west of Australia.