Click on image above to watch video presentation of the latest three monthly seasonal climate outlook. 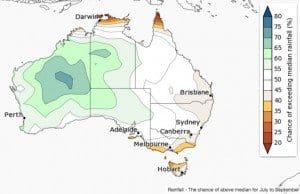 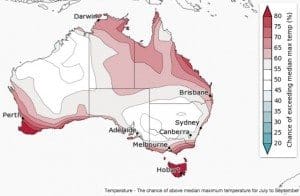 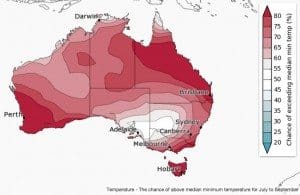 Bureau forecasters say most of eastern Australia has a roughly equal chance of a wetter or drier July to September.

The current outlook reflects anomalously warm sea surface temperatures in the Indian Ocean and El Niño in the Pacific.

Historical outlook accuracy for July to September is moderate over most of Australia, except along the WA border, parts of SA, and areas surrounding the Gulf of Carpentaria, where accuracy is low.

Warmer nights likely for most of Australia

Significantly warmer-than-average sea surface temperatures in the Indian Ocean, and those nearer to Australia are likely influencing the warmer overnight temperatures expected for much of the country.