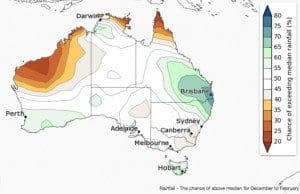 December is likely to be wetter than average across southeast Queensland and northeast NSW, parts of the interior and southwestern Australia, according to the Bureau of Meteorology’s latest three-month seasonal climate outlook statement released this morning.

Across most of Australia, the chances of a wetter or drier summer are roughly equal. However, summer is likely to be drier than average across northwest Australia and the Cape York Peninsula, while wetter than average conditions are favoured across southeast Queensland and northeast NSW.

Current climate influences include a combination of a strong El Niño in the Pacific, a decaying positive Indian Ocean Dipole, and very warm Indian Ocean temperatures.

Historical outlook accuracy for summer rainfall is moderate to high over most of WA, and moderate over the eastern mainland. Elsewhere, accuracy is low to very low.

The December outlook shows maximum and minimum temperatures are likely to be warmer across southern Australia and the far north of Australia.

Overnight temperatures for summer are likely to be warmer than normal across much of the country except in parts of the northwest and eastern Australia, which have an equal chance of warmer or cooler nights.