Click on above image to watch video presentation of the Bureau’s latest seasonal climate outlook. 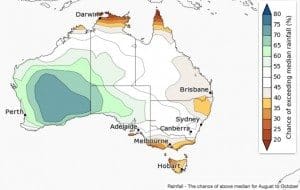 The latest Seasonal Climate Outlook released by the Bureau of Meteorology this morning points to a neutral rainfall outlook for most of the country for the next three months.

The outlook says the El Nino pattern is strengthenening, but may not have the same impact on our rainfall and temperature forecasts as previous El Nino patterns have (see video above for further explanation).

However, drier conditions are favoured in the tropics and far southeast, with a wetter-than-average season more likely in the west.

Warmer nights are very likely for most of Australia, along with warmer days for much of the east and the southern coastline.

The current outlook reflects the much warmer-than-average sea surface temperatures in the Indian Ocean, and El Niño in the Pacific.

Significantly warmer-than-average sea surface temperatures in the Indian Ocean and seas close to Australia are likely influencing the warmer overnight temperatures expected for much of the country. 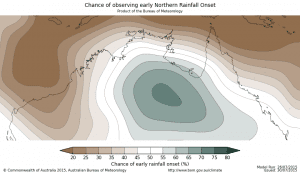 Meanwhile, The Bureau’s northern rainfall onset outlook which provides guidance on rainfall timing within the first months of the Australian northern wet season, suggests an early onset is likely across central parts; while a later onset is likely in west and north.

The latest report shows increased chances of an early rainfall onset over central parts of the Northern Territory and western Queensland.

Over the far north and Western Australia, the northern rainfall onset is likely to be later than normal. 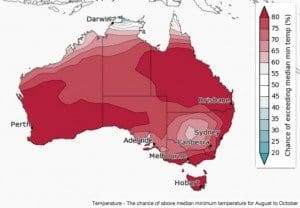 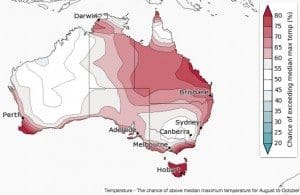