A wetter August to October for much of Australia Above map: Rainfall outlook for August 2020

The August to October period is likely to be wetter than average, with a greater than 65% chance over most of the eastern two thirds of Australia and greater than 75% chance over much of south-west Queensland, south-east NT, western NSW, and inland SA. Above map: Rainfall outlook for September 2020 Warmer nights for most of Australia 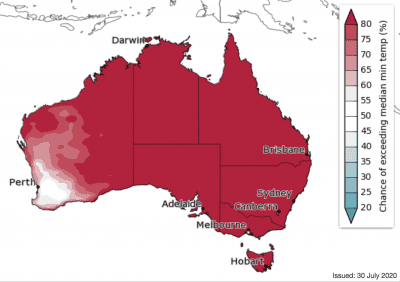 Night-time temperatures for August to October are very likely to be warmer than average for Australia (greater than 80% chance in most areas), although chances are close to equal for much of south-west WA. FORECAST MEDIAN RAINFALL MAY to JULY 2020: ACTUAL RAINFALL RECORDED MAY to JULY 2020: