The Bureau of Meteorology has released its ‘first look’ monthly and seasonal Climate Outlooks for May to July 2018, which point to wetter than average conditions for Tasmania and eastern Victoria extending into southeast NSW.

Parts of northern Australia are also likely to be wetter, however, rainfall during the start of the northern Australian dry season (May-September) is typically low, meaning little rainfall is needed to exceed the median. Elsewhere, the chances of a wetter or drier season are roughly equal.

Historical outlook accuracy for May to July rainfall is moderate over western and southern WA, the southern NT, southeast SA and large parts of the eastern States. 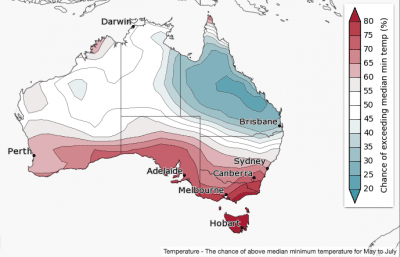 May to July daytime temperatures are likely to be warmer than average for southern Australia, including southwest WA, southern SA, Victoria and Tasmania. Chances are highest (greater than 80pc) in Tasmania. 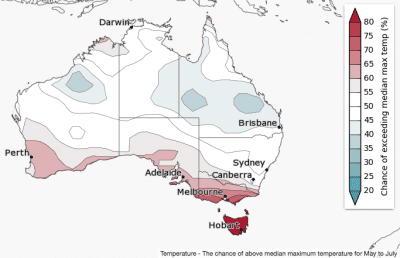 May days and nights are likely to be warmer for much of the country.