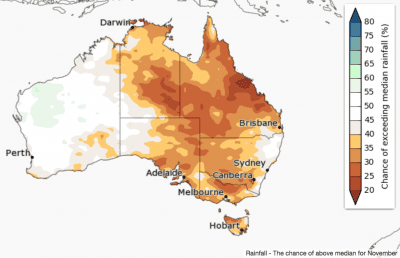 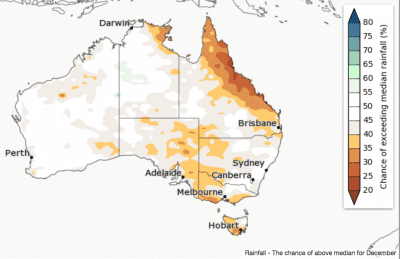 Much of eastern and southern mainland Australia have been very dry and warm since the start of the year. The

Historical outlook accuracy for November to January is moderate over northern and western WA, northern Tasmania, most of Victoria, western and central NSW, most of Queensland, and scattered parts of the NT and SA. Elsewhere, accuracy is low to very low. See map for more detail. High chances of a warmer three months for Australia The above average daytime temperatures observed across Australia so far in 2018 are likely to continue into early 2019.
November to January days are very likely to be warmer than average across Australia. Chances of a warmer three months are greater than 80% over most of the mainland.
Nights are also likely to be warmer than average for much of the country, with the exception of southeast WA, southern SA and western Victoria, where the chances of warmer or cooler nights are roughly equal.