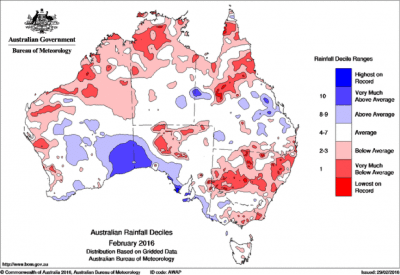 After a generally positive start to the year in January, February has proven to be a drier than average month for many cattle producing regions of Australia

Worst affected were large tracts of northern Australia which rely on summer rainfall to produce the grass required to carry cattle through the long dry season.

Unfortunately for most parts of the north February produced largely ‘below average’ to ‘very much below average’ rain, denying producers a much-needed late wet-season boost.

The dry finish could now trigger an early start to the northern mustering and cattle turnoff season.

New South Wales and most of Victoria also recorded lower than average rainfall in February.

National yardings at NLRS-reported saleyards totalled 234,992 in February, a solid jump on the 163,373 yarded in January, but still much lower than the 311,861 cattle that came forward in February 2015.

The Eastern Young Cattle Indicator averaged a record 596.27c/kg in February, setting a new high of 605.75 on February 22.