Rainfall deficiencies eased slightly in some parts of northern Queensland which received above average December rainfall, but have increased slightly in parts of western Victoria which received below average rainfall for the month. In other parts of the country, rainfall deficiency areas remain generally similar to that reported in the previous Drought Statement. Some parts of southwestern Queensland and northwestern Victoria have received rainfall in the first week of January and may see some easing of deficiencies; these will be reported in next month’s drought statement. 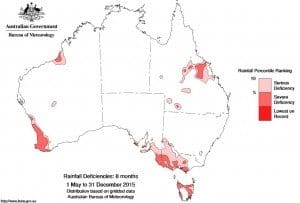 Overall, serious or severe rainfall deficiencies (lowest 10%, or lowest 5% of historical records) are present over most of southwest Western Australia (the area southwest of a line between Jurien Bay and Bremer Bay); southeastern South Australia and much of central and western Victoria; much of Tasmania; and an area of Queensland extending inland from the Central Coast. A broader region around these areas has experienced below average rainfall for the same period, without dipping into serious rainfall deficiencies. 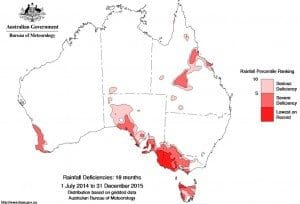 Severe or serious deficiencies (lowest 5% or lowest 10% of historical records) persist in an area extending along the coast of South Australia, and across most of Victoria except Gippsland and parts of the northeast.

Rainfall for the period remains lowest on record for an area spanning southeastern South Australia and adjacent parts of western Victoria. Serious or severe deficiencies also persist across most of Tasmania except an area of the southeast; western parts of the South West Land Division in Western Australia; small pockets of the Cape York Peninsula, and in an area from the central coast to the central west of Queensland near Longreach.

At the 39-month timescale (October 2012 to December 2015), rainfall deficiencies have decreased slightly along the northern and western edge of the affected region in Queensland and for the small area in the Northern Territory. Deficiencies remain similar to the last Drought Statement in other areas. 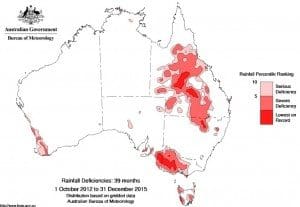 Severe or serious deficiencies (lowest 5% or lowest 10% of historical records) persist in an area spanning southeast South Australia and the western two thirds of Victoria; areas in the west and east of Tasmania; most of South West Western Australia (the area southwest of a line between Jurien Bay and Bremer Bay); and across large parts of Queensland south of the Cape York Peninsula and away from the southeast, extending into part of northern New South Wales to the west of the Great Dividing Range.

The rainfall deficiencies in southern Australia for the 8-, 18-, and 39-month periods are also evident on much longer timescales. The map of rainfall deficiencies for the past 16 years (the period of the current millennium) shows record low rainfall over most of South West Western Australia, with serious to severe deficiencies widespread in northern and central Victoria, neighbouring parts of South Australia and New South Wales, and northern and western Tasmania. Patchy deficiencies are also evident in Queensland, most notably in western parts of the Darling Downs.

The affected regions typically receive significant rainfall during the period from autumn through spring from cold fronts and low pressure systems. However, Australia has experienced a substantial decrease in this activity over recent decades, as high pressure systems have become more dominant. This suggests the tendency for recurrent dry conditions is less related to variations such El Niño, and more due to other changes in the climate system. Research suggests that long-term drying trends over southern Australia cannot be explained by natural variability alone.

These very long term deficiencies are most significant for long-term processes, though recurrent dry seasons may have direct agricultural impacts. These longer-term processes include recharge of surface and ground water storages, and the drying of forest fuels. It is noteworthy that rainfall in northern Australia has been very high during the same period, and particularly so in northwest Australia.

Soil moisture information presented here is from the Bureau’s operational Australian Water Resources Assessment Landscape (AWRA-L) model, developed through the Water Information Research and Development Alliance between the Bureau and CSIRO. More information on the model used and the totals that the decile ranges represent can be found at the new Australian Landscape Water Balance website.

Lower-layer soil moisture (10 cm to 100 cm) for December 2015 was below to very much below average over Tasmania; southwest Western Australia (the area southwest of a line between Jurien Bay and Bremer Bay); southeastern South Australia and most of Victoria, except the northwest, central northern regions, and East Gippsland; parts of northwestern South Australia and the southwestern Northern Territory; other parts of the Northern Territory in the Top End and east; and scattered areas in Queensland.