Debbie on track to bring rain to eastern Qld, NSW 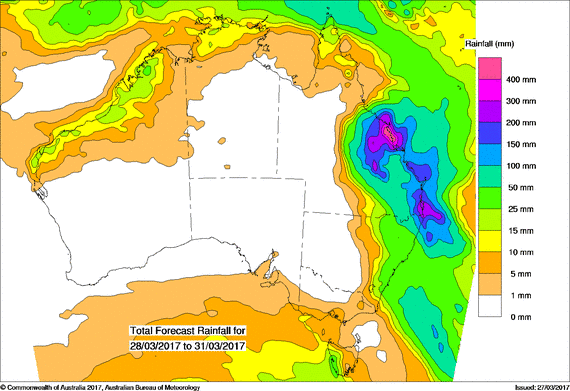 Severe Tropical Cyclone Debbie had made landfall along the North Queensland coast between Bowen and Airlie Beach this afternoon as today’s Beef Central news email was being published.

Queensland Regional Director, Bruce Gunn said estimated sustained wind speeds were at the upper end of Category 4 strength in the range of 185-195km/h, with peak gusts to 270km/h.

Rainfall of about 200mm in one hour was recorded near the centre of the storm in Airlie Beach, with expectations of as much as 500mm being received in some coastal areas during today.

The slow moving system meant coastal towns were being exposed to significant volumes of rain and high wind pressures for long periods. Flooding and structural damage to buildings and infrastructure was being reported as the cyclone crossed the coast.

“Gales are forecast to impact communities between Lucinda and St Lawrence and inland to Mount Coolan and Moranbah for up to 36 hours after the system makes landfall,” Mr Gunn said.

Although the strongest winds are near the core, damaging and very destructive winds can extend several hundred kilometres from the cyclone’s centre. 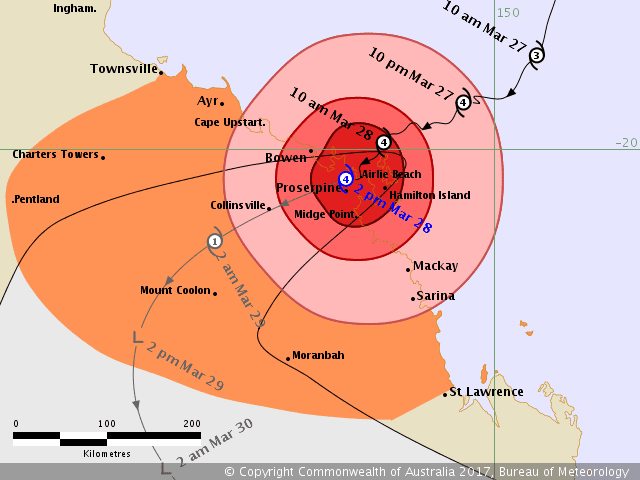 Queensland Fire and Emergency Services are reminding people in affected areas that will not be safe to go outside for many hours after the cyclone passes, and to avoid travel, if possible – remember if it’s flooded, forget it.