Cyclones bear down on NT, Qld 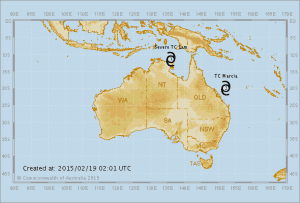 Two cyclones are simultaneously bearing down on the NT and Qld. 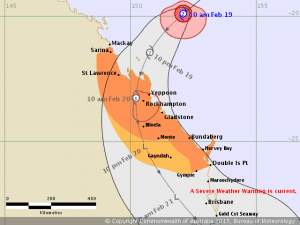 Tropical Cyclone Marcia at 10am today. 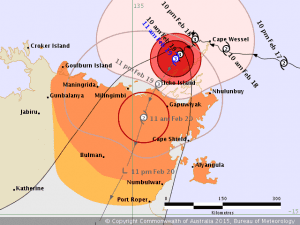 Two cyclones simultaneously bearing down on Australia’s north are carrying fresh hopes of bringing heavy rain to dry paddocks, but some areas most in need appear likely to miss out.

As Beef Central’s daily news email was being sent out at lunchtime today, Severe Tropical Cyclone Lam had changed its course and was heading towards the Northern Territory mainland.

In its most recent update the Bureau of Meteorology was predicting the category three cyclone would make landfall around 4am tomorrow (Friday) near Elcho Island, just off the NT coast.

“It is now a very solid category three cyclone. There is still a fair chance that it could get to a category four just as it makes landfall,” Bureau of Meteorology spokeman Mark Kasermakers told the ABC late this morning.

“It is certainly a pretty destructive system.”

It too is expected to make landfall early tomorrow morning, with a crossing expected somewhere between St Lawrence and Bundberg.

Residents from Mackay to the New South Wales border have been warned to expect intense rain of more than 300 millimetres.

The Bureau of Meteorology (BoM) told the ABC that the system had intensified faster than expected last night, transforming from a tropical low in the Coral Sea into a cyclone about 8pm.

At 11am today the BoM upgraded Marcia to a category two cyclone.

Praying for rain in the north

While much of the immediate focus is on the potential destruction either system could cause to homes and properties, many cattle producers will be praying for the remnants of both events to push heavy rain depressions deep inland in their wake.

The cattle market this week has already shown some evidence of restockers buying in the expectation of further rain, with store prices remaining fully firm despite an easing slaughter cattle market in recent days.

One area desperately in need of rain relief that seems unlikely to benefit, despite between sandwiched between both systems at present, is dry northern and central western Queensland.

Despite being in the middle of both rain events, TC Lam is pushing south west away from Queensland while TC Marcia looks as though it will land too far south to deliver much rain to the drought-ravaged region either.

“In terms of most of the droughted country, Marcia is probably not going to hit where we need it to hit,” AgForce northern region manager Paul Burke told Beef Central this morning.

“Most of the rain is going to be south of that system.”

‘We are starting to see worklplace accidents because people are under emotional stress, they are physically fatigued’

Areas currently experiencing a third consecutive failed wet season include properties along the Flinders Highway to Julia Creek, north and south of the town and the central west such as Longreach and Winton.

Mr Burke said where producers had been enduring severe drought and manual feeding for more than two years, fatigue was now becoming a major problem.

“Because people have been working so hard for so long, and they have obviously all put off most of their staff, there are starting to be accidents because they are so tired,” he explained.

“We had one person break their hip yesterday.

“We are starting to see workplace accidents because people are under emotional stress, they are physically fatigued.

“Seven days a week feeding and doing waters, no break, so mistakes are starting to happen.”

“The sheer volume of work, generally by mum and dad on their own, is just getting really tough.”