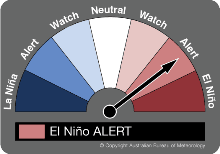 The Bureau yesterday shifted its ENSO El Nino Alert from the watch stage to alert stage.

The chances of an El Nino occurring in 2015 have increased, according to the Bureau of Meteorology.

The Bureau yesterday adjusted the odds of an El Nino occurring this year from 50 percent up to 70 percent, reflecting the same view of several US climate forecasting agencies.

The upward adjustment is based on warmer than normal sea surface temperatures in the Tropical Pacific Ocean, and weaker than normal trade winds, which suggest that further ocean warming will occur.

El Ninos typically result in below-average rainfall and hotter than usual conditions for eastern inland Australia as trade winds draw moisture away from the continent towards the Eastern Pacific.

It is still a little early for predictions of an El Nino to be made with certainty. The annual climate cycle typically shows its hand from May to June, which climatologist Roger Stone describes as a critical “phase locking” period which determines rainfall probabilities for the following 12 months.

However Dr Stone also agrees with climate models from Australia and the US showing a much higher than normal risk of an El Nino developing.

“The risk this year and into 2016 is very high, certainly at this stage, largely due to the massive area of sub-surface warm water across the tropical pacific,” Dr Stone told Beef Central.

“The US agencies are generally the closest to best predicting the final outcome.

“Last year produced what is often known as a ‘Modoki El Nino’ where the central pacific is the main area that warms – but that type of event still reduces our rainfall here in Queensland.”

The SOI is currently at minus 10.2 – see chart below courtesy of Weatherzone (Click on chart to view in larger format)