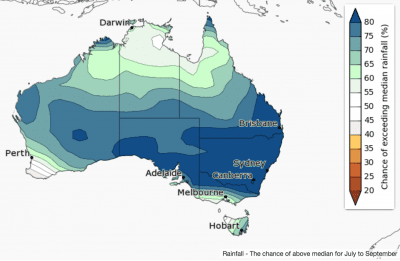 Wetter than average conditions are likely for most of Australia over the next three months, according to the Bureau of Meteorology’s latest seasonal climate outlook issued this morning.

July to September rainfall is considered likely to above average across most of Australia.

However, southwest WA and western Tasmania have roughly equal chances of a wetter or drier three months.

July is likely to be wetter for most of Australia, except southwest WA.

Historical outlook accuracy for July to September is moderate over most of Australia, but low in parts of the tropical north, near the WA border and central SA.

Cooler days likely for much of mainland Australia

The onset occurs when enough rain has fallen to stimulate plant growth after the dry season. This is the date after 1 September when a location has received total accumulated rainfall of at least 50 mm.

The outlook is updated monthly from June to August.

The statement issued on Thursday, June 30, rates the chance of an early northern rainfall onset for 2016–17 is higher than average over much of northern Australia.

The highest likelihood is over the Top End of the Northern Territory, Cape York Peninsula, the Kimberley and southeast Queensland