The bull selling season is moving along quickly with 84 bull sales completed in August and another 50 held in the first two weeks of September.

Some of the high averages for Angus bulls at sales like Millah Murrah and Booroomooka and for Charolais and Ultrablacks at Palgrove have been astounding despite an unhelpful season.

But there are bulls out there to suit every budget. Some sales are averaging in the $5000 range but the high profile operators are still commanding averages close to or over the $10,000 mark. 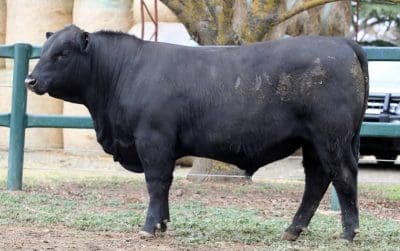 The top priced bull went to Matt Cherry and Shelly Piper of the Trio Angus stud from Cassilis NSW who invested some of the proceeds from their sale earlier in the month where 57 bulls averaged $9605.

Despite the the dry season which has been hanging around for a fair while, 40% of Millah Murrah’s bulls went within 100 km the radius of the property.

Principal Ross Thompson said it was pleasing the local guys could get set with bulls in the $8000-$10,000 range which they were happy to pay given the strong brand recognition they were receiving the premium prices in the marketplace.

Buying support from Queensland was ‘huge’ according to Mr Thompson with bulls heading to eight different operations up there.

Long term Millah Murrah bull buyers, the Shaw family from JS Grazing at Injune Qld have been rewriting the commercial weaner record prices at the Roma saleyards in recent years. They went in strongly taking six bulls at an average $21,333.

Richie Hooper from Taroom Qld returned for the fourth year to purchase five bulls to $20,000 twice for his large Brahman based operation.

New buyer Ron Pullen of Codrilla Pastoral Co near Comet Qld paid to $20,000 and an average of $15,666 for six bulls to go into his large Romagnola herd.

Ross Thompson said he was stunned by the 2016 results and even more so by the 2017 results which is expected to be somewhat dampened in the immediate term while waiting for the big rain.

“There is plenty of confidence out there in the beef industry and savvy commercial cattlemen can see strong returns by investing in genetics. Demand is very strong for bulls that exhibit weight for age, thickness and softness coupled with strong balanced EBVs”, he said.

There is no doubt that the poor season is affecting averages and clearances for many sales but industry-leading vendors and buyers are looking to the future and generating results close to last year’s.

Palgrove had another outstanding sale at Dalveen in southern Queensland. Their 100 Charolais bulls sold to $40,000 three times to average $13,065 while their 57 Ultrablack bulls averaged $10,351 for an overall average of $12,076 for 157 bulls. Ultrablacks are best described at Brahman infused Angus earring higher Angus content than a Brangus.

The focus has moved north quickly into bos Indicus territory. The Droughtmaster National at the Gracemere complex at Rockhampton started today (Tuesday) with 330 bulls on offer and concludes tomorrow (Wednesday) with another catalogue of 260 bulls.

Rockhampton Brahman Week early next month has retained its reputation as being the largest single breed sale in the world with 975 red and grey Brahman bulls to be offered over three days at the Gracemere complex from October 2 to 4 commencing at 8 am each day. The sale kicks off with 536 grey bulls selling on days 1 and day 2 followed by 439 red bulls on days 2 and 3.

Also in August a Wagyu bull in the top one % of the breed four terminal carcass index and marbling sold for a $88,000 during the Wagyu Premium online-only sale on AuctionsPlus. This 13 months old bull was offered by Macquarie Downs Wagyu from Leyburn Queensland and purchased by a Sydney-based newcomer to the Wagyu breed.