John Landy ran world record times as a runner, but was also ahead of his time as an agricultural scientist, former colleagues have remarked following the middle-distance running legend’s death at his home in Castlemaine, Victoria, last Thursday. 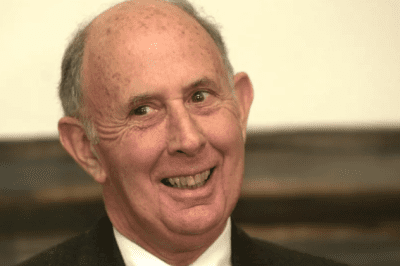 The former Victorian Governor’s 91 years were packed with accomplishment.

A dedicated conservationist and natural historian, one his many achievements involved creating one of the country’s finest butterfly collections, which he gifted to the Australian National Museum in 2018.

It has been written that his athletic prowess stemmed from his time as a boy chasing butterflies through paddocks around Melbourne.

He initially took up competitive running to help him get fit for Australian Rules football. In 1949 and 1950 he played for the University of Melbourne’s Dookie College while studying for a Bachelor of Agricultural Science and won the 1950 Central Goulburn Valley Football League’s best and fairest award.

He made the Victorian athletics team in 1951, going on to become the second man in history to break the four minute mile barrier, behind Englishman Roger Bannister with whom he shared several celebrated contests.

Bannister, who became a neurologist, once described John Landy in Sports Illustrated as “an athlete faster, neater and more generous than any other.”

His outstanding record as an athlete was matched by his integrity and selflessness as a person. One of the most enduring memories of his athletics career came at the Australian Mile Championship in 1956. In a winning position, he stopped to help fellow athlete Ron Clarke who tripped and fell in front of him with about a lap and a half to go.

After checking on Clarke, Landy got going again, circled the field and won a race that assured him a place in the Australian Olympic team.

A statue depicting the incident (right) was erected later outside Melbourne’s Olympic Park and, in 1999, the Sport Australia Hall of Fame declared Landy responsible for the nation’s Finest Sporting Moment of the Century.

In January 2001 John Landy was appointed the 26th Governor of Victoria, serving in the role until April 2006.

He was awarded an MBE for services to sport in 1955 and was made a Companion of the Order of Australia in 2001.

With brothers and a sister involved in agricultural businesses John Landy took a keen interest in agriculture and conservation, and graduated from Dookie College with a degree in ag science while at the height of his running career in 1954.

He was for a large part of his career a research and development manager in the Rural Division of ICI and became a foundation member of the Land Conservation Council in 1971, serving until 1979.

He authored two books: “Close to Nature, a Naturalist’s Diary of a Year in the Bush” and “A Coastal Diary, a Study of one of Australia’s Wildest and Most Beautiful Coastlines”.

Mr Landy’s passion for research and leadership in the agricultural sector was reflected by his appointment to roles including chairman of the Wool Research and Development Corporation from 1989 to 1994, chair of the Meat Research Corporation from 1995 to 1998 and President of Greening Australia from 1998-2000.

In 1984 he was elected a fellow of the Australian Institute of Agricultural Science, and in 2012 he became Patron of the Invasive Species Council, which works to tackle Australia’s growing weed and animal pest problems.

Don Lawson, an agricultural scientist and a pioneer of performance-recorded livestock breeding, trained with John Landy as a junior athlete growing up in Melbourne.

“It is a sad day for agriculture,” he told Beef Central and Sheep Central on the weekend.

“They will talk about his running but his contribution was really in agriculture. He had what is missing today, a thing called integrity, he knew what conflict of interest was.

“He was our number one ag scientist, a person ahead of his time as an environmentalist and conservationist in agriculture.”

Mr Lawson said Mr Landy played a key role raising awareness about protecting red stringy bark trees from being ringbarked by cattle when they were short on fibre, and drew attention to the importance of developing understories when planting trees to keep bird and insect species in balance.

“He was very unassuming, and he was not frightened to lose,” Mr Lawson said.

“He was a significant figure in agriculture and in my opinion one of the foremost ag scientists.”

Executive director of the Australian Council of Wool Exporters and Processors, Peter Morgan, said he knew John Landy when he chaired the Wool Research and Development Corporation from 1989-1994.

“The thing that struck me most about John in this role was that when he spoke publicly to wool growers about the work that the WRDC was doing, he confined himself to a few projects, which he spoke about in considerable detail to provide his audience with a better understanding of the work that they were funding.

“Also, he was an incredibly nice person.”

John Landy’s commitment to serving sport and the community also included roles as president of Athletics International from 1973-1977, a member of Australian Institute of Sport from 1985 to 1987 and chair of Victorian Australia Day Committee from 1990 to 93.

John Landy passed away at his home in Castlemaine, Victoria, last Thursday surrounded by his family after a long battle with Parkinson’s .

He leaves his wife Lynne and children Matthew and Alison.