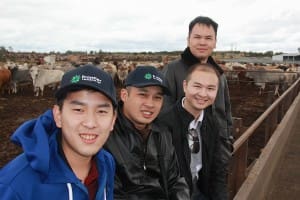 Daryl, Bobby, Wilson and William Hasan at a Darling Downs feedlot on their recent tour of Australia.

Few trade relationships have been tested as relentlessly in recent years as those involved in Australia’s cattle export trade to Indonesia.

However, after major setbacks including the June 2011 export ban by Australia and subsequent large import quota cutbacks by Indonesia, shipments have returned to significant levels as Indonesia seeks to overcome a severe beef shortage.

With the recovery in trade has also come a renewed commitment by companies at both ends of Australian-Indonesian supply chains to form stronger and mutually beneficial partnerships that are better equipped to avoid or handle future shocks.

An example of the efforts now being invested by companies in Australia and Indonesia to understand the needs of the other was on display when a large Indonesian delegation toured Queensland and the Northern Territory two weeks ago.

Exporter Frontier International Agri hosted the tour by the next generation of the Hasan family from Tanjung Unggul Mandiri (TUM) from Jakarta, who also brought with them several abattoir owners and butchers from their downstream supply chain.

Over the past 15 years TUM has become one of the Jakarta region’s largest cattle importing and lot feeding businesses, under the ownership of the Hasan brothers Buntoro, Pudjantoro/PJ and Sanko Hasan.

Now the next generation of Hasan family members are taking up the reins in the management of the company, with Buntoro’s sons Wilson and William, and Sanko’s son Daryl, all in key leadership positions.

Bringing both ends of supply chains together

Beef Central met Wilson, William and Daryl and several of their customers with Frontier International Agri representatives Tony Gooden and Jack Gleeson during a feedlot visit on Queensland’s Darling Downs recently, before the group flew north to visit cattle stations and export depot facilities in the NT. 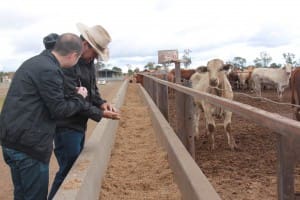 Wilson, William and Daryl each undertook their university studies in California, which is reflected in their near perfect English. As they drive around the feedlot they absorb all the detail they can, noting differences in rations, ADGs, cost of gain, discussing management techniques and strategies with the feedlot’s owners.

Wilson Hasan, director of TUM, told Beef Central that it is essential that those at each end of any supply chain understand the needs of the other, which was the reason for travelling to Australia and bringing several of their own key customers with them.

“The purpose of the trip was for the next generation of our family and our customers to visit Australia to have a very clear understanding of how the supply chain in Australia works and what the major issues that influence the trade are,” he said.

“We have learnt to understand the vagaries of the climate and seasonal conditions, trends in the use of genetics and the logistical challenges in transporting livestock over such long distances.”

Asked if they had a message for Australian cattle producers, Wilson replied: “The key message is that we require good quality Bos Indicus content cattle from Australia along with reliable delivery.”

The past three years have been particularly turbulent for the Australian/Indonesian cattle trade due to political pressure on both sides.

However the Hasans believe there are strong signs both countries now recognise the importance of the trade.

“We are confident the governments of both countries have a steady and sensible view of the trade and how important it is to both countries.

“It is a natural market which complements both countries and we are very confident of the future as the market has now slowly stabilized with the opening up of trade volumes. 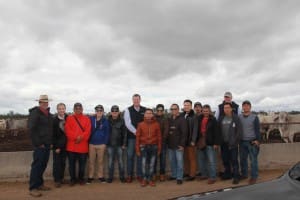 The tour included a large number of TUM’s downstream customers in Jakarta including abattoir owners and wet market butchers.

“We believe the new Indonesian Government will have the same perspective with the previous one by supporting the trade so that our people can continue to enjoy affordable and quality beef from Australia.”

The fundamental numbers paint a strong picture for demand.

Indonesia is the world’s fourth largest country with 250 million people (smaller only than China, India and the US).

It is a rapidly developing country with one of the world’s fastest growing economies, and its middle class is growing by 8 million people per year.

As a result, beef consumption is set to gradually increase in Indonesia.

“With this outlook, we hope it gives the Australian Government and producers the confidence they need to expand their capacity as we look to feed our growing market for beef,” Wilson said.

However, he said it was also important to note that despite Indonesia’s fast growing economy, average income per capita is only around 36 million Indonesian Rupiah (IDR) or US $3000.

This meant that the price of beef remains very sensitive to the consumer.

“A reasonable/fair price will increase demand, but any sudden surge in price will quickly kill demand as consumers look to source cheaper alternative protein source such as chicken which is only quarter the price of beef in the country,” he said.

“We need time on both ends of the supply chain to build and adjust the price one step at a time in order to capitalize on a growing yet price-sensitive market. 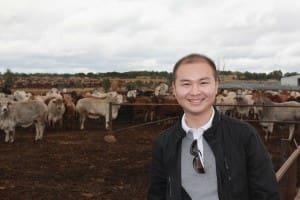 “With the help of the Australian government, we hope the producers will be supported, as we strongly believe that cattle industry in Australia can supply Indonesia’s needs.”

Wilson said the introduction of the Exporter Supply Chain Assurance System (ESCAS) had been in the main a positive development for the trade, as it has enabled cattle to be killed humanely and efficiently.

He said RFID tags had also helped their business to measure the performance of cattle from various regions and individual properties. “This has assisted with our management and also increased accountability with the Australian exporters as well as the Government,” he said.

Among the supply chain partners on the TUM tour was Hendri, one of the largest abattoir operators in Jakarta.

He told Beef Central that Australian cattle were always in demand from wet market butchers because of their quality and meat yield.

He also said that ESCAS had been a positive development for his business because it was good for animal welfare, and that also translated to more efficiency for his business.

A reciprocal trip is planned in coming weeks where Australians from some of the northern properties the TUM delegation visited will travel to Jakarta to learn more about TUM’s operations and needs.