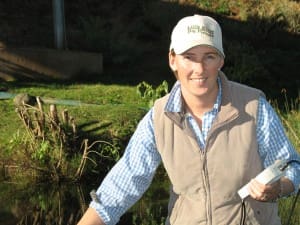 Pip Job, a New South Wales grazier, environmental advocate and Chief Executive Officer of her local Landcare group has been announced the national winner of the 2014 Rural Women’s Award.

Pip was announced as the 2014 Award winner by the Minister for Agriculture, Barnaby Joyce in front of more than 250 industry leaders, politicians and past winners at a gala dinner at Parliament House, Canberra on Wednesday evening.

Jackie Jarvis, a primary producer from Western Australia was named national runner-up. Jackie jointly owns a commercial vineyard and wine production company and through her work with the Chamber of Commerce WA assists with strategies for workforce recruitment, retention and planning for the agricultural sector.

Pip received a $10,000 bursary as part of the NSW state Award earlier this year which will allow her to undertake a study tour and develop a training program for women aimed at developing ways to manage the challenges of rural life. This program will increase the capacity of rural women to manage climate change and finance in a complex economy, as well as increase their personal resilience using a social, ecological and economic platform.

Pip is passionate about the impact that rural life can have on farmers and has instigated changes in the way Landcare operates to include the social needs of the community. This has included the ‘Women in the Landscape’ program which fosters learning, the exchange of experiences and the up-skilling of women to become more involved in farming businesses; a program, which due to its success, is now being rolled out nationally.

Pip has also worked with various Landcare groups across New South Wales to help them improve their governance and has provided planning and advice on policies, procedures and staffing.

As the national winner, Pip will receive an additional $10,000 bursary to enable her to develop her leadership skills and participate in speaking engagements where she can share her passion for up-skilling, motivating and building the networks of Australia’s rural women.

RIRDC managing director, Craig Burns congratulated Pip on winning the Award and said her dedication, energy and encouragement of rural women is a great example of leadership at its best.

“Pip was chosen as the national Award winner from a field of seven very strong state winners. Pip’s ability to actively engage the community in which she lives, encourage people to get involved and to actually make change happen is nothing short of inspirational,” Mr Burns said.

“Pip’s passion, drive and determination is clear, and her desire to up-skill rural women, foster learning and generally make things better for rural people and the environment has been deservedly recognised.

“All the state winners this year are of the highest calibre and I am confident we will see all of them further develop their leadership potential and continue to inspire and drive change in their communities and industries.”

“Women remain the cornerstone of so many farming operations, from manager of day to day activities, the farm labourer, the bookkeeper, and running the house. They are so often the most vital cog and unpaid.

“The RIRDC Rural Women’s Award is a leading awards program that recognises women in our rural communities.

“Ms Job has instigated significant changes to Landcare policy and recognises the impact rural life can have on farming families. This has resulted in the ‘Women in the Landscape’ program which is being rolled out nationally.

“Winning the 2014 Rural Women’s Award allows the opportunity to further develop leadership skills. The role provides the platform to be a peer leader, building the networks of Australia’s rural women.

“Ms Job and Ms Jarvis are a deserving winner and runner-up, and have the capability to drive innovation and productivity within primary industries and rural communities.

“State winners highlight the diverse areas where women exercise influence including a teacher, a veterinarian, a lawyer, a grazier, a dairy farmer, a horticulturalist and a viticulturist,” Minister Joyce said.

Minister Cash said women in our rural communities provide strong leadership and support within agribusiness and the RIRDC Rural Women’s Award highlights this.

“Rural Australia is the birthplace of our nation’s spirit of determination and hard work and it is alive and well in the women we see represented here.”

“These incredible women exert leadership in all aspects of their lives. They are leaders in their professional and business spheres, and they are leaders in their communities. They are role models to young girls and women within their communities, as well as to Australia more broadly. I thank them all for their very valuable contributions,” Minister Cash said.

As the pre-eminent award for rural women in Australia, the RIRDC Rural Women’s Award identifies and supports emerging leaders who have the capability and resources to drive innovation, productivity and sustainability within primary industries and rural communities.

Applications for the 2015 Rural Women’s Award are now open. Rural women are encouraged to enter themselves or to nominate someone with a commitment and desire to making a real difference to their industry and community. Applications close on 31 October 2014.