A detailed assessment of the dollars returned to industry for every dollar spent by Meat & Livestock Australia across its entire portfolio of programs has been undertaken as part of the latest five-year review process.

The financial modeling by the Centre for International Economics has identified MLA’s best performing programs from 2010-11 to 2014-15.

Topping the list was “market access”, which was assessed to have generated a benefit-cost ratio of 24.0:1, or $24 in benefits for every $1 invested by MLA.

The report also found that each of MLA’s four main strategic areas of activity (maintaining and improving market access; growing demand; increasing productivity; and industry integrity and sustainability) generated a positive return on investment ranging from $14.80 for every dollar invested to a low of $3.80 for every dollar.

Five programs returned below $3 for every dollar invested.

So how were these figures arrived at?

Some complicated methodologies which are beyond this reporter’s ability to explain play a large role, but in simple terms the assessment aims to quantify only those impacts which could be deemed to have resulted from MLA expenditure during the five-year review period.

The same financial modeling framework used by the CIE for this economic impact assessment was used by the Red Meat Advisory Council last year to quantify the Meat Industry Strategic Plan (MISP2020).

■ the global meat industries (GMI) model — contains a detailed representation of demand and supply for meat and livestock globally; and

■ the integrated framework (IF) model — contains a detailed representation of the Australian red meat value chain.

The below chart illustrates how these models work together to provide a comprehensive representation of the red meat value chain: 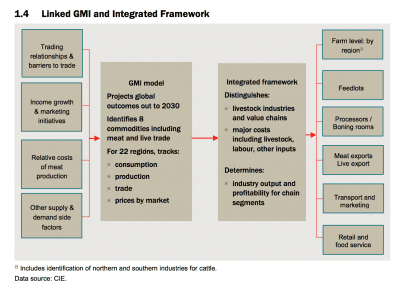 The report says five steps were involved to identify the cost benefit ratios of every dollar spent in each program:

■ Identify total MLA expenditure, both planned and actual, by program and by year;

■ Identify economic, social and environmental achievements for each program over the review period;

■ Assess the industry impact and identifying areas for improvement through workshops with independent technical and industry expertise;

■ Feed the results of the workshops into industry wide economic models (mentioned above) to assess impact by species and sector;

■ Summarise the model results in the report to MLA.

To capture the benefit of MSA, for example, the process involved identifying the difference in returns generated for a carcase that is MSA graded versus a non-MSA carcase.

Mr Norton told Beef Central that the figures produced by the financial modeling were then tested with industry stakeholders before being finalised.

“We are very cautious when we publish these numbers that it passes the BS test with industry,” he said.

“So that is why when we looked at MSA for example, industry sat in that evaluation process.

“So it wasn’t just the CIE delivering a financial model.

“People from the whole value chain get to comment and say things like ‘well that’s not right, or that is right, or I don’t think you should be calculating that, that is a perceived value, not a real value etc.”

In cases where MLA was a part funder of a project that resulted in an industry impact and the assessment team judged that the project would not have proceeded without MLA investment, the entire benefits from the project were assigned to MLA.

If it was deemed the project would have proceeded anyway without MLA’s contribution, the only benefits attributed to MLA were the degree to which MLA funding sped up the delivery of project outcomes.

Feedback from a senior Australian Government trade negotiator involved the successful Free Trade Agreement (FTA) talks was that “the red meat industry was the most organised, the most coordinated” of all of the sectors involved, Mr Norton said.

“You know we are pretty quick at having a go at ourselves in the red meat industry, and there are plenty of people out there that like to have a go at MLA and the red meat structure.

“I congratulate the industry for having the foresight as an export nation to invest in global markets, and to have done so for 20 years.

“Through collaboration as an industry we have kicked a lot of goals and I don’t think the red meat industry gets enough credit for the extraordinary things it has achieved.”

Are these reviews ‘truly independent’?

The last mandatory performance review conducted for MLA for the 2005-6 to 2009-10 period was criticised by some MLA stakeholders for a perceived lack of independence. This was based on the view that if MLA appoints its own reviewer, and is presented with a draft copy of the report to provide feedback on before the final report is produced, the review process lacks independence.

The ACIL Allen report contains a paragraph which explains that the draft findings and recommendations were presented to MLA for feedback and critical comments before being presented in the final report.

“This provided MLA an opportunity to correct any errors of fact or to test the underlying assumptions in the report,” the report stated, before noting that “all final findings and recommendations presented in the report are ACIL Allen’s and represent the independent nature of the review process”.

In response to questions from Beef Central, both MLA and ACIL Allen dismissed any suggestion that the formal review process lacked independence.

“It is pretty hard to question something that had some many people involved in the process,” Mr Norton said.

“Over 200 people from our industry had input into this.”

Mr Norton said MLA was “hands off” in the review process.

“That (independence) is something that we were really aware of in this process.

“Hence, when the project partners were picked, it wasn’t an MLA committee that picked who was going to do the report, it was completely independent of MLA.”

Asked if MLA had taken the opportunity to make any corrections or suggested any changes to the draft report, Mr Norton said the only changes involved updating graphs and charts used in the report to ensure they were up to date and correct.

He added that MLA was already aware of the issues identified by the report.

“Here’s the answer to that question, there were two areas that identified that MLA didn’t deliver.

“And you know that I have been going out and saying that is absolutely correct, even before I got the report.

“You weren’t listening to industry if you weren’t getting that feedback.

“The board said people have to be held accountable for this lack of delivery around these projects and those actions were taken.

“So in terms of accountability some pretty stiff action was taken, we haven’t just rolled along with the status quo.”

ACIL Allen principal JP van Moort said the company was an independent economics and strategy firm which handled a large number of independent reviews for RDCs like MLA.

Providing a draft report to the organisation being reviewed was standard protocol, he said.

“It is just about dealing with errors of fact and points of clarification,” Mr van Moort explained.

“At no stage during the review did MLA try to change any of the findings or recommendations.”