Given the dependency of the Australian beef industry on export markets, beef producers have long been aware that international beef prices and the $A exchange rate have a big impact on the prices that are paid for cattle in Australia. It is fair to say that it is not always obvious what affects the price differences observed between Australia and the USA, however the new statistics database made available by Meat and Livestock Australia (MLA) at least provides some improved transparency on this question.

There has been a great deal of conjecture about the factors that affect beef prices in Australia over recent years, to the extent that there is now a Parliamentary Committee inquiring into this question, and in particular the impact of consolidation in the meat processing sector on meat prices. Many Australian cattle producers have for a long time looked at the prices paid for cattle in the USA, and wondered about the reasons for the much higher prices that prevail in that market. While higher prices for US cattle are understandable given the cost of shipping Australian beef to the US market (historically one of Australia’s largest beef markets), the fact that the difference between Australian and US beef prices is subject to significant fluctuations over time raises many questions.

The following graphs, generated from data now available from the MLA website, provide a history of this issue over the past fifteen years. The first graph also highlights that it is not just Australian cattle producers who receive lower prices than their US counterparts, with South American cattle producers generally receiving a similar discount relative to the prices reported in the USA. The second graph below examines the differences between US and Australian beef prices a little more closely. It shows that for the early part of the 2000s, the gap between US and Australian prices was reducing, and it settled at around $0.50 /kg liveweight by 2005-06. The 2007-08 soft commodities price spike saw the price differential expand rapidly to reach $1.50 /kg liveweight, before again returning to it previous level. From 2011, the price differential rapidly expanded and reached $2.50 / kg liveweight in late 2014, as the Australian beef price buckled under the pressure of sustained high slaughter numbers due to the drought in northern Australia, and possibly the extra supply created by the live cattle export suspension in 2011. 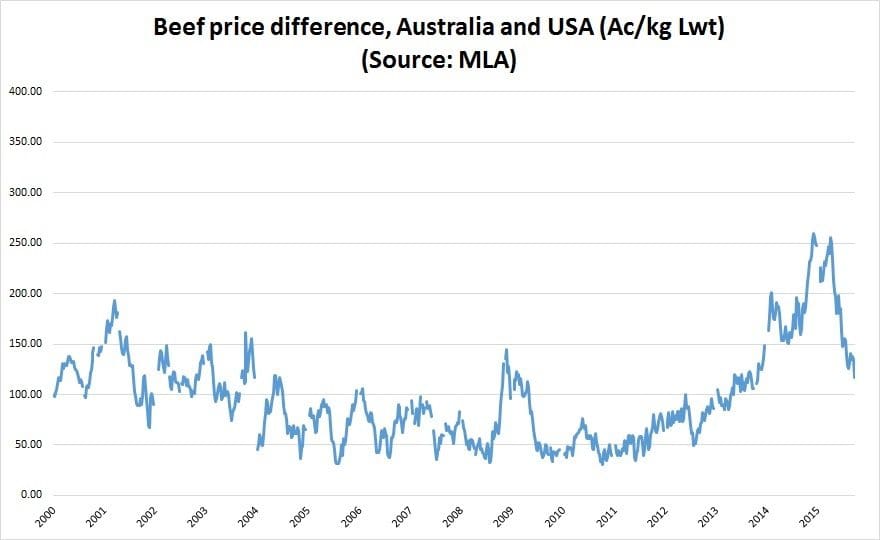 It is interesting to note that the USA-Australian beef price margin has narrowed considerably over the past year, and is currently at its long-term average of around $A1.00 /kg liveweight. It will be interesting to see whether it returns to what became the normal level during the mid-2000s of around $0.50 / kg liveweight, as the Australian slaughter numbers inevitably decline over the next six months due to the reduced herd size. There is also evidence of the commencement of herd rebuilding in the USA, which would likely result in reduced cattle slaughter rates there, and therefore strengthen demand for imported beef from nations such as Australia.

There are clearly a lot of different factors that impact on beef prices, and more specifically the margin between US and Australian prices. It will be interesting to see whether the current Parliamentary inquiry sheds more light on these issues.0