Livex shipping standards must be made tougher again: Wellard

Australia may be recognised as having world-leading shipping standards for livestock, but the country’s biggest live exporter says regulations must be toughened further to prevent poor outcomes. 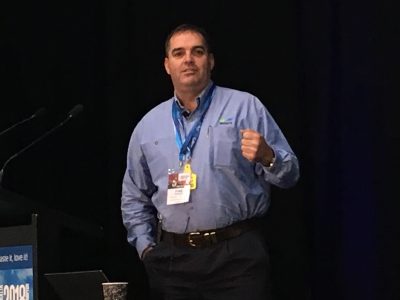 Wellard executive director operations Fred Troncone told a Beef 2018 forum that like most people in Australia he was horrified by the footage of sheep suffering on a live export vessel to the Middle East shown on 60 Minutes.

The publicly-listed exporter clearly fears that the Government may move to shut down the sheep export trade in response. He said that would be a disaster for the industry and in particular for livestock producers. Previous market shut downs in Indonesia and Bahrain had led to immediate drops in the price of livestock. The live export trade provided an important competitive market outlook for producers that underpinned livestock prices, and he urged producers to fight for the future of the trade.

He said that the Australian livestock export trade had a very good statistical record in delivering sheep and cattle safely to overseas destination, with on-board mortality rates of less than 1 percent for millions of animals exported each year.

However, he acknowledged that the entire industry still had to lift its game to prevent outlier incidents from happening, and in his view, self-regulation had not worked.

He told the forum that fierce competition between exporters is one of the drivers of the problem. 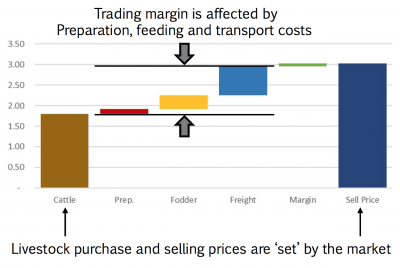 Mr Troncone said exporters have most control over preparation, feeding and transport costs – changing these could increase the exporters margin, but could also increase the risk of poor animal welfare outcomes. Click to enlarge.

The main costs exporters could control in the export process were those involving levels of stock preparation, on-board feed and freight costs.

There was also a strong commercial incentive for exporters to try to minimise costs where possible to stay competitive and increase their margins, which had the potential to lead to corner cutting and the kind of results seen on 60 Minutes.

“There are a dozen serious exporters in the trade all competing against each other. Competition drives the search for cost-efficiencies.

“You are going to try to cut costs to be competitive, because if you are 20c above the market rate in importing countries you are not going to sell and you are going to go out of business pretty quickly,” he said.

“We are all driven by commercial pressures to cut costs.

“The thing that balances all of that and stops exporters from doing the wrong thing are the regulations.

“So we need to set the minimum requirements in areas such as export shipping standards, so that we don’t do the wrong thing as exporters.”

Mr Troncone said there were already dozens of pieces of legislation regulating the industry.

However, the problem was, community expectations were moving faster than the regulation.

He said a key area legislators should be focusing on is lifting shipping standards.

“We have been banging on about shipping reform for about 10 years. Multiple trips to Canberra, multiple presentations to multiple ministers, and we have seem them come and we have seen them go, and the legislation hasn’t really been updated.

“That would mean better ventilation standards and automated watering systems on all vessels. We need to take out double tier decks, where you are packing sheep into ships into this amount of space, one tier on top of the other, you can’t possibly get good air flow into that situation between the sheep.

“These are all things we have been going on about for a number of years.. Why? Because I want this business to be around in 20 years time, 30 years time. If we don’t do something we might not be here.

“Of course you can take regulation too far, if you make them so tough that it becomes unviable, then we shut down anyway.

“So there needs to be good balance, but I think there is opportunity to find that balance.

“We can’t self-regulate in this industry, because we are driven by profits, so you can’t ask exporters to go and regulate yourselves, go and sort yourselves out, and get your act together. If I try and go and do that, then my competitor is going to say well I am not going to do that and I will undercut you and I am going to sell and you are not.

Mr Troncone urged producers to get behind the livestock export trade and call for legislators to fix what is broken, not to ban entire markets.

He said the industry had also done a “pretty poor job” of advertising the amount of work it had done in implementing animal welfare initiatives in the countries in which it operates.  “I can honestly say in every market we have gone into, we have improved animal welfare. If you take that away, then I fear things will revert back to what happened the way they were before.”

Has the time come for an exporter to lose a licence?

Asked at the forum if it was time for an exporter to lose a license, Mr Troncone declined to answer the question directly, but intimated that much stronger consequences were required for those who do the wrong thing.

“In principle, without commenting on any particular exporter, I liken it to the drink driving laws. If you get caught drink driving, you are going to have your licence taken away from you.

“If there is no consequence then it is very difficult to modify behaviour. I did some work with police departments some years ago, and their objective was to modify driver behaviour. And the way they did that is putting booze buses out there and doing all that.