PRICES for feedgrain have steadied in the past week as rain forecast for New South Wales and southern Queensland, and news of domestic grain shipments to Newcastle and Port Kembla, temper demand for wheat, barley and pulses. 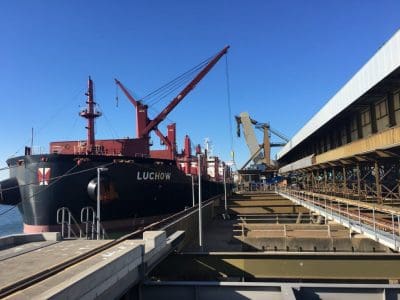 The Luchow discharges West Australian grain at the port of Newcastle. The grain will go to end-users in the Hunter Valley and surrounds to supply this part of the drought-affected NSW market. Photo: Dan Cox

The Bureau of Meteorology is forecasting falls of up to 75 millimetres over the weekend for the parched northwest plains of NSW, and 20mm for central NSW.

While growers and traders are sceptical that much will fall, any rain will brighten the outlook for pastures and crops across the state, with yield outlooks in southern areas which have had as much as 200mm of in-crop being on track for average if the weather is kind between now and harvest.

“The east-coast market is feeling toppy, and I get the feeling the urgency has gone and prices have steadied,” one southern NSW trader said.

“When it’s cheaper to load grain in Western Australia, sail it to Port Kembla, unload it on to a truck and drive it to the southwest slopes than it is to buy it within the region, it shows you just how expensive things have become.”

“Things are a bit quieter this week than they have been, and not that people are seeing boats are starting to come round, that might cap prices.”

The prompt delivered wheat market in the Riverina is trading at $410-$420, and more or less in places, and its end-users are hopeful of getting some irrigated wheat tonnage from the region’s growers, especially if its protein is too high for soft wheat specifications. 7 and 14 day rainfall forecast maps. Click on maps to enlarge.

While very little of the intended winter cereal area sown in northern NSW has come to anything this year, most crops in the state’s southern half will be profitable for growers to harvest.

Canola has patchier prospects, as many crops are likely to yield less than 1t per hectare of seed, and will have more value for grazing or hay.

“Canola is looking worse and worse as the weeks go by in some areas,” Mr McKinnon said.

Some mixed farmers have put stock on to crops they were until recently intending to harvest, and others will spray crops out to provide some ground cover for their paddocks in the summer months.

Cottonseed ex southern NSW gin last week broke through the $600/t barrier, and has been thinly traded since.

Current-crop cottonseed was reported trading in the $670s/t delivered Darling Downs this week., while free-on-truck cottonseed ex Moree gin was quoted at around $650/t.

New crop cottonseed for delivery from commencement of ginning in 2019 was offered $200/t cheaper than current crop.

A spokesperson for Department of Agriculture and Water Resources said there had been an increase in applications for imports of processed plant-based stockfeed.

Perhaps ahead of that, feedlot customers have reported trimming least-cost feed ration formulations to cut the proportion of inputs that for them were out of line, and cottonseed this week was in their sights.

For example, if feedlots cut their normal inclusion rate by half, their effective period of ownership of cottonseed would double the time remaining without having to buy more.   The small percentage of cottonseed taken out of a ration in this way would be replaced by a combination of grain and other non-grain feed ingredients such as urea.

Buyers, tired of paying higher prices, appear to have decided to concentrate on covering this and next month, and have held off on coverage of new-crop positions until they have a clearer handle on the weather which will determine yields.