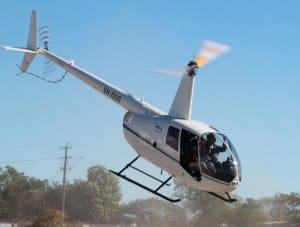 Flying at night in remote areas without sufficient visual cues continues to be one of the most dangerous forms of flying, as evidenced by a recent fatal accident in Western Australia’s Kimberley region.

An ATSB investigation into the accident found the pilot of an R22 helicopter, who did not hold a night visual flight rules (VFR) rating or instrument rating, continued flying after last light to try to reach Springvale station.

The lack of local ground lighting on a moonless night meant the pilot had no visual cues to know exactly where the helicopter was going or reliably control its attitude, and collided with terrain 46km short of the intended destination.

Night flying continues to pose a high risk for many pilots, particularly those in remote areas where there is little to no ground lighting. On average there are two accidents a year that occur from visual flight at night.

“We continue to be concerned about the frequency of accidents – many fatal – that involve pilots flying with reduced visual cues,” said ATSB Chief Commissioner Martin Dolan.

“Based on research from other countries, accidents at night tend to be unforgiving and more likely to lead to death.”

In the 20 years between 1993 and 2012 there were 26 accidents in Australia that occurred in visual (night) conditions. There were also another 10 accidents involving inadvertent VFR flight into ‘instrument meteorological conditions’, such as poor weather or cloud. Those 36 accidents resulted in 58 deaths. Nearly all of the accidents occurred on dark nights.

“This fatal accident in the Kimberley highlights the inherent high risk of night flying in remote areas,” Mr Dolan said.

For pilots, the ATSB’s message is simple.

“Day VFR pilots need to plan to arrive at their destination at least 10 minutes before last light and to have a realistic ‘Plan B’ to use when it becomes apparent that an intended flight cannot be completed in daylight,” Mr Dolan said.

“It is important, also, for operators and others involved in the operation of aircraft to actively support safety-first pilot decision-making.”

Flying with reduced visual cues is one of the ATSB’s nine SafetyWatch priorities.

Under visual flight rules (VFR), it is crucial pilots have sufficient visual reference to see and avoid obstacles. Visual cues are also required to maintain orientation so VFR pilots know which way is up and can maintain control of their aircraft. There are often less visual cues at night, even though visibility may be good.